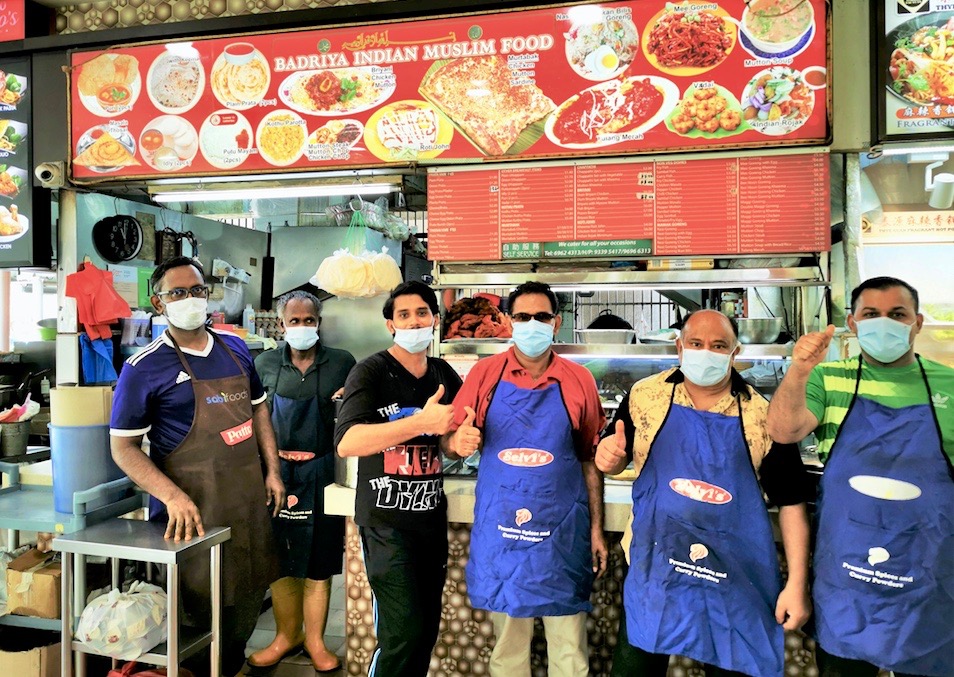 Cooks and helpers at the stall of Mr Abdullah, an Indian-Muslim food hawker for the past 13 years, prepare 400 packets of food for migrant workers each day. All photos courtesy of YMCA Singapore.

When the COVID-19 pandemic hit the streets of Singapore, Abdullah M also felt darkness befalling him and everything he was once familiar with.

An Indian-Muslim food hawker for the past 13 years, Abdullah had grown accustomed to the bustling chatter of customers alongside metalware clanking against each other as orders were rushed out frantically. Hawkers are cooking hundreds of meals daily for migrant workers, seniors, persons with special needs, and the less privileged in YMCA’s Wok the Talk drive.

But when Circuit Breaker measures kicked in last month, these familiar sounds ground to a halt. What was left was the occasional murmur among staff, who themselves were becoming more listless by the day as customer numbers dwindled to near zero.

He was at his wit’s end – footfall at his Jurong West stall had dropped by 40-50%, with the usual breakfast and lunch crowds staying home. As a triple whammy, the price of raw ingredients surged as Indian suppliers reduced their exports to Singapore.

With the government’s latest move to isolate foreign workers in the dormitories, big caterers were also consuming more Indian food supplies, leaving smaller players like him in the lurch.

Thankfully, his lifeline came in the form of the latest YMCA initiative – Wok the Talk.

The project links up different players in the community, connecting beneficiaries who lend each other a helping hand.

YMCA plays the role of fundraising and coordination, while hawkers are commissioned to prepare food for migrant workers, low-income families and seniors.

Taxi drivers, whose trade has likewise been badly affected by the COVID-19 situation, are roped in to deliver food to the various homes and dormitories.

“I told them, any amount will do as this is about helping others.”

Over the past few weeks, cab driver Wang Geok Lee was plying the streets fruitlessly for hours on end. He had resorted to queuing for over an hour at hospitals or taxi stands, but even then passengers were few and far between.

The 65-year-old was starting to feel the heat as his earnings dropped by 30%. With a housing loan that needed financing, and a secondary-school going daughter depending on his income, he was feeling the strain.

So when his long-time neighbour approached him to be part of the Wok the Talk project, he was immediately sold. So keen was he that he agreed wholeheartedly without quoting a price for his delivery services.

“I told them, any amount will do as this is about helping others,” said Wang cheerfully. “I also thought that the timing couldn’t be more perfect – I get to help others and earn some income along the way.” Wang’s benevolence went as far as delivering food packets to far-flung dormitories in Tuas twice a day during lunch and dinner times. He assisted in the loading and unloading of food packets and made multiple stops across dormitories to deliver the food. He declined to charge any more than what his meter showed.

“If I can help to give that small amount, I want to help. It just means saving a little more on my end.”

His kindness was not easy to come by, as attested by the YMCA volunteers who had approached other private hire drivers to assist in the food delivery – several had quoted a higher fee.

Some drivers also eventually backed out of the project as some of dormitories were identified as new COVID-19 clusters. There were also worries about food stains and smell in the vehicles.

A cabby for the past two decades, Wang shrugged this off, adding that it has been meaningful to be part of this project. He got to learn about foreign workers, he said, including their plight of being far away from home and confined to rooms in remote parts of Singapore.

That spirit of giving has been imbued in him from young, as he used to help his father deliver cooking oil to hawkers. Even as he took up driving as a vocation, he helped to ferry seniors to day activity centres for token sums.

“It is really okay. If I can help to give that small amount, I want to help. It just means saving a little more on my end,” he added.

Manager of YMCA’s International Programmes, Joyce Yu, who is part of the Wok the Talk project team, has been moved by the selflessness of the hawkers and taxi drivers like Wang. The YMCA team running Wok the Talk: (L-R) Tan Su Lin, Jestyn Koh, Joyce Yu and Steve Loh. One of the rewards of the drive has been seeing a revival of the “kampung spirit”, as hawkers, taxi drivers and beneficiaries who were once strangers, now greet each other by name, says Joyce.

Akin to the biblical story of the widow’s offering of her two copper coins, the stories Joyce has heard have been heart warming.

“Even with our different backgrounds and faith, we get to share life and struggles during this peculiar time of need.”

“Despite their lack, they want to give back to the community and stand in solidarity with the rest,” said Joyce.

“God has really humbled me through this experience and created an opportunity for us, even with our different backgrounds and faith, to share life and struggles during this peculiar time of need.” This has been a “most special experience”, say the hawkers and drivers, who have come to befriend each other despite being of different faiths.

She and YMCA are essentially just playing the role of a “social glue” and cultivating the “kampung spirit” as hawkers, taxi drivers and beneficiaries who were once strangers, have come to greet each other by name over the course of this project, she said.

The real stars are the hawkers and taxi drivers who clearly extolled the virtues of “loving your neighbour as yourself”.

Abdullah is now under a different kind of heat as he churns out over 200 packets of food daily in under two hours. It has been a “most special experience”, he said. Unlike the past, where his Singaporean customers eat for leisure, he is now cooking for those who are needy.

“The migrant workers are also brothers and sisters from the same creation.”

At one point, Mr Abdullah even dug into his own pocket to top up the cost of meals of his signature nasi briyani. This was after receiving feedback that the previous day’s meal of roti prata and curry was not sufficient for the migrant community, each of whom easily eats four to five chapatis in a single meal.

Mr Abdullah said he learnt that migrant workers do not usually eat at hawker centres as the portion is often too small and they cannot afford to pay more. “So why not give them something good to eat, especially in such times of need?” he said.

The jovial 54-year-old who repeatedly declined to be photographed, noted: “The migrant workers are also brothers and sisters from the same creation and we must help when given the opportunity to.”

“For me, the greatest happiness is being able to show love to others,” he said, hastily ending the call so that he could head down to his stall to prepare the day’s evening meals.

From 4 May 2020, YMCA wil be preparing 1,000 meals for four groups: Migrant workers, seniors, persons with special needs, and less-privileged youth and their families.

YMCA is currently engaging 25 hawkers and drivers to prepare and deliver these meals to beneficiaries’ doorstep.

In order to identify beneficiaries for the Wok the Talk project, YMCA is partnering about 10 other Social Service Agencies. As part of the project, the team will also order and deliver 50 grocery packs for vulnerable seniors who are mostly above the age of 65 once per month. Each meal costs around $5 and each grocery pack $50.

YMCA is keen to recruit more hawkers to be part of the Wok the Talk project. It is also looking to raise $360,000 to support those affected by the COVID-19 crisis.

For more information on the Wok the Talk project, please go to: https://www.wtt.ymca.org.sg.

"This is the time for thought leadership with the mind of God": Pastor Benny Ho reminds church leaders