What does it mean to be the Light of the World? 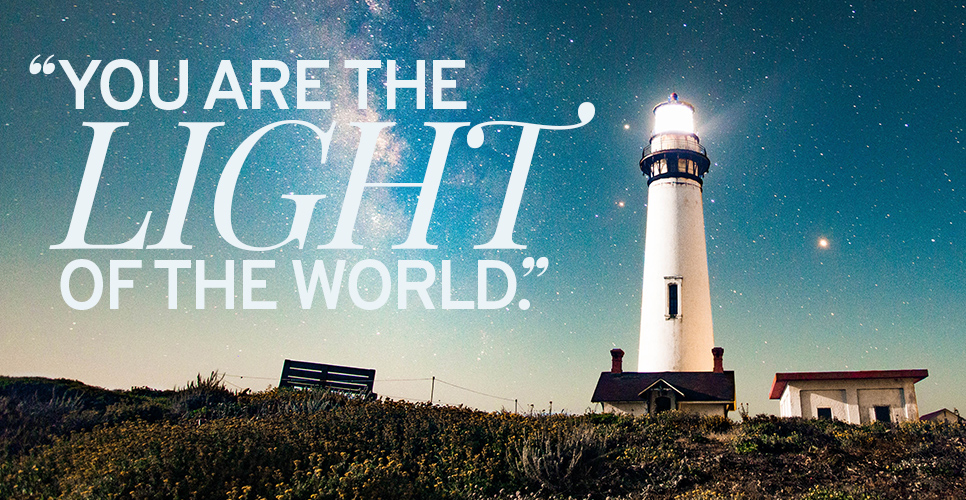 Photo by Allen Cai on Unsplash.com

Salt and light. These are two unforgettable metaphors.

The Sermon of the Mount (Matthew 5-7) is Jesus’ manifesto of Kingdom discipleship. Everything else that Jesus taught in this grand manifesto is entirely anchored upon our understanding of these two metaphors. Jesus masterfully employed these two striking metaphors to convey something fundamental about radical discipleship.

The first metaphor, salt of the earth, has to do with discipleship with a sense of distinctiveness. It relates to one’s identity in the world.

The second metaphor, light of the world, has to do with discipleship with a sense of destiny. It relates to one’s influence of the world.

This is the second in a two-part series by Reverend Edmund Chan. Read the first article here.

Understanding “Light of the World”

The second discipleship-metaphor Jesus employed is equally profound: “You are the light of the world” (Matthew 5:14-16). This metaphor itself is accompanied by the stirring call of our Lord: “Let your light shine.”

Let your light shine! A hidden light is a useless light.

That’s our destiny: To glorify God. To bear witness to His grace and greatness.

Thus Jesus tells us in verse 15, “a city on a hill cannot be hidden, nor do men light a lamp and put it under the peg measure.” A peg measure is a small bowl, a measuring for grain. Put it under a peg measure means to cover it with this bowl. It’s not the right thing to do.

The purpose of the lamp is to give light. And to light up a lamp and put it under a bowl to hide doesn’t make sense. It’s incongruous.  It misses the whole point.

Not under the bowl but on a lampstand! That’s our destiny: To glorify God. To bear witness to His grace and greatness. And Jesus Himself gave us the reason for shining: “Let your light so shine before men that they may see your good works and glorify your Father who is in heaven.” (Matthew 5:16)

Living with a sense of destiny

Now, when Jesus said “you are the light of the world”, there are at least three things I find rather surprising. It grabs our attention.

The first surprising thing is that this glorious declaration was addressed to an inconspicuous, insignificant ragtag band of disciples. They were not among the world’s elite. To this inconspicuous and insignificant bunch, Jesus said: “You are the salt of the earth, you are the light of the world.”  This is a biblical principle; the Almighty God uses ordinary people to live extraordinary lives for His extraordinary purpose!

The second surprise is that the term “light of the world” is used of Jesus Himself. In John 8:9, Jesus said of Himself, “I am the light of the world” (reiterated in John 8:12 and John 9:5). Now, we ask ourselves, who exactly is light? Christ or us?

As far as Jesus is concerned, He had two tasks. One is totally exclusive to Himself – to give His life as the perfect sacrifice on the Cross as a manifestation of God’s light, life and love. He is the light that coming into the world brings light to all men.

But there is a second task. In fact, originally this task was given to Israel. They were given a task to be a witness, to be a light. But they failed miserably in their task. So, God gathered His Church, the spiritual Israel, and said to her “Look, you are the light of the world. You are the witnesses of God”. What a privilege!

The third surprise is the scope of the task. God gave it to an ordinary group of people and said “you are the light of the world”. Let your light shine wherever God has placed you. That is His strategy! Whenever it gets dark around you, you can either curse the darkness or light a lamp. Let your light shine. Wherever He places you, you shine as a light everywhere you go. People will be attracted to your light.

A city set on a hill cannot be hidden. It attracts people.

Be light. Live with a sense of destiny.

Be salt. Live with a sense of distinctiveness.

That’s discipleship of “a certain kind”! Reverend Edmund Chan is a seasoned disciplemaking pastor. The Leadership Mentor in Covenant Evangelical Free Church, Edmund is widely regarded as an insightful Bible expositor and a wise mentor of Christian leaders. In 1995, he launched the annual Intentional Disciplemaking Church (IDMC) Conferences. He also serves on the advisory councils of several Christian organisations.

From struggle to significance

What does it mean to be Salt of the Earth?