How one woman’s cancer scare snowballed into raising more than $60,000 for end-of-life patients Tracy Quah (centre) is "not the sort of person who goes to art galleries". Yet after a cancer scare, she was prompted to use art to bless others. Within a short three months, Quah and team were ready to sell art-emblazoned masks to benefit HCA Hospice Care. She is pictured with a patient (left) and artist Glacy Soh. All photos courtesy of Galven Lee.

Tracy Quah had been experiencing pain in her abdomen for years, but had never thought her condition was anything to worry about – even after being hospitalised three times in three consecutive years.

She was sent for a PET scan to check for cancer and underwent an operation to remove the cysts. Quah, who is in her 40s, is vice president of marketing in an IT software firm.

“When we are healthy we should give back, rather than wishing we had done something when we are on our death bed.”

The good news was that she was free of cancer. But her health scare got her thinking about giving back to the community.

“When we are healthy we should give back, rather than wishing we had done something when we are on our death bed,” she told Salt&Light.

Her first idea was to deliver food to people who are ill, along with handwritten notes of encouragement. But she realised her budget of $2,000 could only go so far.

Then she heard a still voice telling her to use art.

“I was at home. Not even in a garden or an art gallery when the inspiration came.”

Quah described herself as “not the sort of person who goes to art galleries”, much less someone gifted in art or with knowledge of the discipline. Tracy Quah’s search to bless the community led her to HCA Hospice Care, where patients have a hand in creating paintings to benefit the charity. Artist Glacy Soh (right) watches as a patient adds detail to the painting.

How was she to use art to make a difference?

She did not know. But she trusted that if this was God’s plan, He would see it through.

A friend connected her with Dr Tan Poh Kiang, the former president of HCA Hospice Care. They met over a meal to discuss some ideas.

“One year later, we’ll be sitting at this same table, and you will be telling me what God had done.”

What the project would look like, how it was to happen, she did not know. But Dr Tan believed that God would use Quah to bring artists together, and that this art would be able to help others.

“He told me: ‘One year later, we’ll be sitting here in this same restaurant, at this same table, and you will be telling me what God had done.’”

Quah was bewildered. What she had in mind was a small one-off project.

“Besides, I am only one person. I wondered how I was going to bring artists together. I don’t even speak the jargon of artists.”

Dr Tan told her to trust God, and not to limit Him.

So he linked her up with the current CEO of HCA Hospice Care, Angeline Wee, who shared how the charitable organisation provides medical aid at no charge to patients with life-limiting illnesses.

Patients have the option of visiting the day hospices, or having the medical teams visit their homes. The organisation also offers psychological support for patients.

“Alone, I may have five fishes and perhaps only one loaf.”

Beneficiary decided, Quah started her search for an artist. She prayed: “Lord, if this is your project, then you need to bring the artist.”

While doing online research, Quah chanced upon Sound of Art, a business started by a family of collectors, who support artists who produce works of art inspired by the Gospel, and provide a platform for these artists to sell their work.

She got in touch with Galven Lee, a co-founder. Lee told Salt&Light that he felt a synergy between Quah’s plan and his family’s business mission. The idea set in motion by Tracy Quah (second from right), brought on board collaborators who included (from left to right) the Sound of Art’s Dawn Yang and Galven Lee; CEO of HCA Hospice Care, Angeline Wee; artist Glacy Soh; and Tracy’s former colleague, JK Low, CEO of Route3, who was present at the first meeting.

Lee predicted that the one-off project she was proposing would become a movement.

A week after the two met, a team – including an artist – was in place. It turns out that the artist, Glacy Soh, had also been praying for God to show her what her next project would be. Even before Lee approached her.

Pause in the rat race

The initial idea was to create and sell a series of paintings to benefit HCA Hospice Care. Quah named the project The Life Art.

“The whole idea is to celebrate life. We chose the theme 画出你的心声 which basically calls for the expression of what is in our hearts through art,” said Quah.

“In our Asian culture, we often mourn when our loved ones or someone we know passes on. We don’t recognise that the individual has lived a good life.” Each year, more than 3,000 patients with life-limiting illnesses receive medical care for free from HCA Hospice Care.”The patients were very happy to take part in the project. They found the project meaningful, and were greatly encouraged,” said Tracy. Pictured are the hands of a day patient (right) and Glacy working together on a painting.

The blooming and withering of flowers in the five-piece series represent the ever-changing seasons of life, while the migratory patterns of the birds, whisper stories of people we meet and part along the journey of life.

Her life was so fast-paced, Quah forgot to celebrate life until “God picked me out of the rat race, making me pause and reflect”.

This celebration of life was also inspired by stories from Salt&Light that touched her when she was ill. They were stories of people living out their last days with hope, joy and strength, and the legacies they left behind.

“Wow, God, You really are amazing.”

Together with day hospice patients, Soh created a five-panel series of paintings. Each panel in The Remembrance Series celebrates a major season in a person’s life: Youth, marriage, family, generational blessings and the golden years.

Then Lee’s girlfriend, Alice Yu, suggested selling reusable masks emblazoned with prints of the paintings. Masks are indispensable in the current Covid season, affordable and reach a far larger pool of people than paintings could.

The masks are bundled and sold in sets of three, accompanied with this message to spur wearers to contemplate and cherish life. The team appointed a local textile company to produce a total of 5,400 masks.

Within the first week of pre-orders opening in early January, a third of the masks and three of the panels of paintings were snapped up.

“And I began receiving calls from overseas, countries like Hong Kong and the United States. People were telling me about their cancer stories,” said Quah, whose story was shared to provide context to the fundraiser.

Beyond attracting international orders, the project has drawn others who are keen to collaborate with Quah and Lee on projects to bless the community.

“I took a step back and thought: ‘Wow, God, You really are amazing,’” said Quah.

And then Quah’s surgeon requested to buy all five panels of art.

“But we had already sold three of the panels!” said Quah. “We then decided to have Glacy and the hospice patients paint another five panels.”

At time of writing, the project has raised more than $60,000. The project has the potential to raise over $100,000 from the sale of masks and two sets paintings, with possible support from other grants.

“And we had only planned to raise $25,000!” exclaimed Quah, who helped seed the project and purchased masks for hospice patients with the $2,000 she had set aside.

Through this journey, Quah saw the power of prayer.

“When I needed a beneficiary, I prayed, and I met Dr Tan. When I needed an artist, I asked God to bring me one, and He did. God connects the dots.”

“I sometimes joke that I have prayers that have been unanswered for decades. But for this project, everything happened so fast,” Quah said of the three months that elapsed from the time she contacted Dr Tan to getting the masks ready for sale.

“In the corporate world, things don’t happen so fast,” said Quah. She estimated that it would have taken several weeks, if not months, to agree on a partnership and another three months of preparation.

“Alone, I may have five fishes and perhaps only one loaf,” said Quah referencing John 6, where Jesus fed the crowds from the little that was available. “But God brought together people of different abilities and it led to something much bigger.”

Said Lee: “Tracy brought her experience, her story and her network. Sound of Art brought the artist and the expertise. And HCA brought the cause.'”

And God multiplied their collective efforts.

If you would like to support HCA Hospice Care, you may purchase a set of masks here. Jewel Yu is a communications and new media undergraduate at the National University of Singapore. The intern at Salt&Light hopes to write articles that touch hearts and leave a lasting impact. She is an adventurer and avid lover of nature, and hopes to travel the world with her guitar, friends and family.

Down to their last 45 cents, yet this pastor and his wife never went hungry 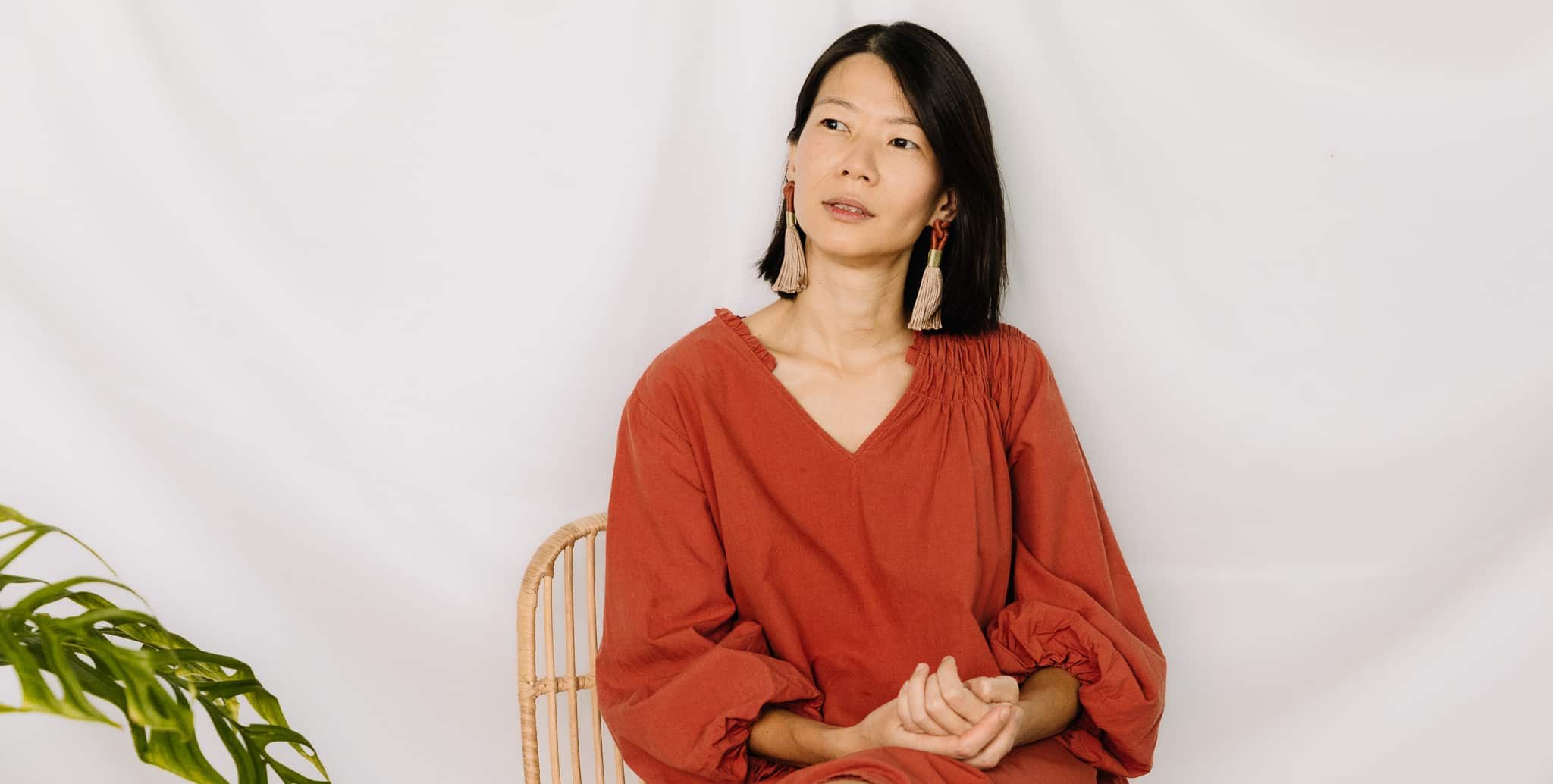 5 lies I believed when I was into New Age spiritualism “Many go through suffering to find God. But God found me first to prepare me for suffering”: He testified till his last breath