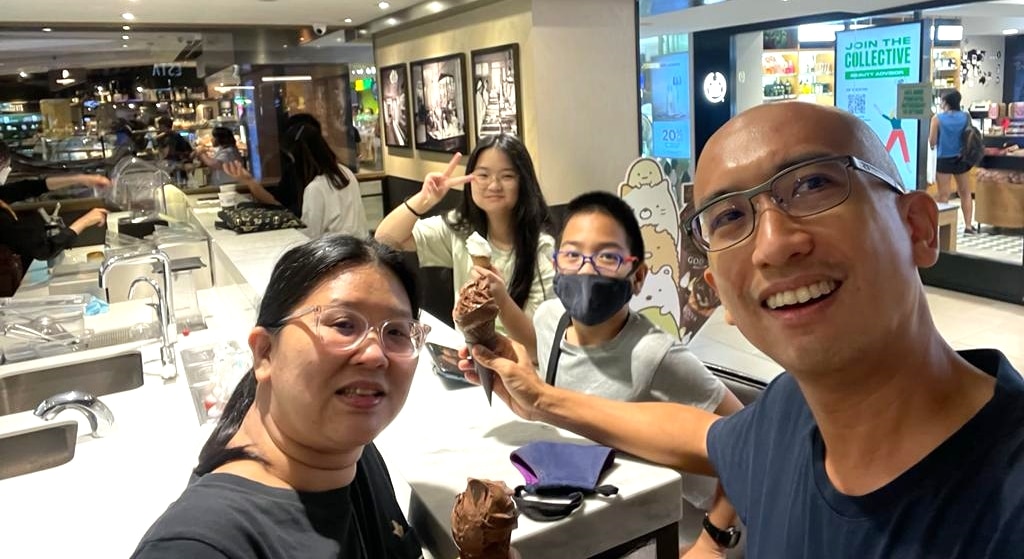 Clement Cheong (right) with his wife Wiselyn and children Clara and Luke. Clement is always on the lookout for something new to do with his children as a way of bonding with them. Photo courtesy of Clement Cheong.

The black box arrives with an ominous warning that it should not be opened till the start of the mission.

He and his 12-year-old son Luke had signed up for The Select: Mission 1114, an interactive guided adventure organised by Focus on the Family Singapore. Set up like a Mission Impossible adventure with shades of Escape Room and Amazing Race, the activities-driven mission was designed for a parent and a tween to bond over fun, heart-to-heart conversation and an opportunity to affirm each other.

Not quite a child, not yet a teen, the changes leading up to puberty can be as terrifying as they are tumultuous.

Father and son went for the inaugural December 2021 edition.

“I thought it would be quite interesting. Because of SMM (Safe Management Measure), we couldn’t attend camps. We couldn’t travel either.

“This event was a hybrid activity with moving around built in. We could do it in our own house because it was self-directed.

“I thought it would be better than not doing anything,” said Clement, “so I asked my son.”

“I had nothing to do during the holidays, so I said okay,” Luke added.

The teen years are notorious for being difficult ones for parents and children to navigate. But the tween years – between the ages of nine and 12 – are no less difficult. Not quite a child, not yet a teen, the changes leading up to puberty can be as terrifying (to parent and child) as they are tumultuous.

Here are some parenting tips from those with tweens:

Remember those trips to the zoo, outings to the beach and evenings at the playground with your young child? Don’t give up on having fun times together now that your child is a tween.

When his children – Luke and Clara, now 15 – were little, Clement would let them wash the family car with him. Washing the car together used to be a way Clement bonded with his children. Now, he looks for others ways of sharing activities with them. Photo courtesy of Clement Cheong.

Said Clement: “It started when I took a pail one day, intending to wash the car. Luke said, ‘I want to follow.’

“We thought this would be a good way to take him out and have fun.”

“The two of them would go down with extra pails of water and play till they were all wet.”

Those days of splashing good fun are long past, and Luke and Clara no longer ask to wash the car with their father. But Clement has not given up on creating adventures with his children.

That was why he signed himself and his son up for The Select: Mission 1114 and has signed up for the June edition with his daughter.

Shirleen Yap, 37, signed herself and her 12-year-old son, Matthias Ng, up for The Select: Mission 1114 for the same reason. Shirleen Yap and her son Matthias Ng with the box that held a code for their adventure with The Select: Mission 1114. Photo courtesy of Shirleen Yap.

“It was something interesting. I thought it would be a good opportunity for me to spend one-on-one time with Matthias.

“Last year, we thought that going from P4 to P5 was a huge jump for him. He was very, very busy with school work and commitments. We thought this would be a good way to take him out of that and explore something fun together.”

Matthias did have fun. “I liked going out to different places during the mission.”

One of the activities of The Select: Mission 1114 involved a deck of cards with conversation starters. Asked what else he enjoyed of the mission with Mum, Matthias cited the conversations.

“We’ve always tried to be really honest in our conversations with our children,” said Shirleen who has three other children – two sons aged 10 and nine, and a six-year-old daughter. Shirleen with her husband Enoch Ng and their children, whose names form the acronym MADE (Make a Difference Everyday), a reminder that they are to be salt and light of the earth. Photo courtesy of Shirleen Yap.

“We have no qualms about sharing our personal experiences. But we try to keep cool when they start to talk back. They have minds of their own and are asserting who they are; they want to make their own decisions.”

The conversation starters reminded Shirleen that she needed to understand things from her son’s perspective.

Even so, Shirleen admitted that the questions on the deck of cards left her “stumped on a few occasions” as to what her response should be.

Recalled Matthias: “There was one question where we had to talk about sex and marriage partners.”

The conversation starters reminded Shirleen that she needed to “do more in terms of communication with him, understand things from his perspective and not be afraid to speak about topics that are less popular or taboo”.

The deck of conversation starters remain helpful to the participants.

Said Clement: “Once in a while, I use the cards to have conversations with my children.”

“My dad plays Mobile Legends with me,” said Luke.

The mobile multiplayer online battle arena (MOBA) game is a family affair for the Cheongs. Luke, his sister Clara and dad Clement often play together.

Said Clement: “Now, it’s 2022. Times have changed, everything has changed. The world that we lived in is no more.

Playing with his children is Clement’s way of understanding the world through their eyes.

“I play with them to know what is happening in their world. Because of my children, I have an Instagram account. No choice.”

Shirleen attempts to do the same, playing Brawl Stars, another MOBA, with her children.

“But after a while, they realise Mummy is not a good player,” she said with a laugh.

“There are changes,” said Shirleen.

“Raising a tween taught me to be constantly evolving in how I parent my children.”

As a child, Matthias was very expressive and open with his affections.

“We made an effort to remind him that we are here.”

“There was once I brought the children out and I was carrying a lot of things. He was five. He said, ‘Mama, let me help you carry your bag.’ Or he would give up his seat for me. Things like that to show his love.”

As Matthias grows, the Ngs have had occasion to revisit some of their parenting practices and “fill the gaps and holes”.

“There was a time he clammed up, didn’t want to share much. He said he would rather share with friends in school rather than us. We thought we had kept conversations open. Shirleen makes it a point to spend one-on-one time with Matthias to engage him in meaningful conversation. Photo courtesy of Shirleen Yap.

“So, we made an effort to remind him that we are here, we want to hear his thoughts – good and bad.”

They also take him out for one-on-one time so he can share without fear that his siblings will gossip about him with their mutual friends.

“My older one Clara is more mature. So, she is like mother part two with Luke. She will discipline him.

“Sometimes, I hang back and watch them interact. I let go. Sometimes, Luke will correct his sister. I know some parents may say, ‘Eh, cannot like that.’

“But I want them to bond. I tell them to learn to settle their differences on their own.”

“My parents trusted in us. That gave me the guiding principle when I became a parent.”

“In P3, we were discussing whether to go into GEP (Gifted Education Programme) school or not. In the end, I chose to stay in my school and my parents supported my decision.

“When I chose to take Higher Mother Tongue, they supported me as well,” said Matthias.

This was something Shirleen learnt from her own parents.

“My parents trusted in us – my two younger siblings and I. When we make certain decisions, they didn’t question us but they were there to provide advice.

“That gave me the guiding principle when I became a parent, to be very mindful not to control them in terms of their decisions.”

The Cheongs have a Saturday routine.

“We drive to Plaza Singapura in the evening, park at Level 6 and eat at the ramen shop by the food court. The people know us so well, they just say, ‘Same?’ Luke with Clement during The Select: Mission 1114. They hung out at a fast food joint to complete some of the activities. Photo courtesy of Clement Cheong.

“Then, we go down to the café at Level 2 and sit there till it’s time to head home. The people there also know us. They will say, ‘Same? Iced chocolate and chocolate cake?’”

It may seem boring, said Clement, but it is a family tradition.

For the Ngs, they are starting a tradition with Matthias. This year he turns 12 and they are planning on taking him on a staycation to do things he likes. They plan to do the same with their other children when they turn 12.

“It’s the last year to do this as a child. Next year, he pays adult fare,” said Shirleen in jest.

Turning 12 is a “milestone year”, and she and her husband intend to make the rite of passage a special time for Matthias.

They model the value of putting God first by carving out time for family devotions daily.

In Luke’s card to his dad, Clement, he wrote: “Daddy is my hero.”

Asked to elaborate, he said: “He is always driving me to school and finding new things for us to do. He would also volunteer with the SCDF (Singapore Civil Defence Force). I admire him.”

In the Ng household, the parents model the value of putting God first by carving out time for family devotions daily. Every one takes turns to lead, even the youngest child who is six.

“When my sister leads, she just directs who reads the material and who prays,” said Matthias.

“Mummy, what is sex?”: Tips on how to talk to your kids about the birds and the bees