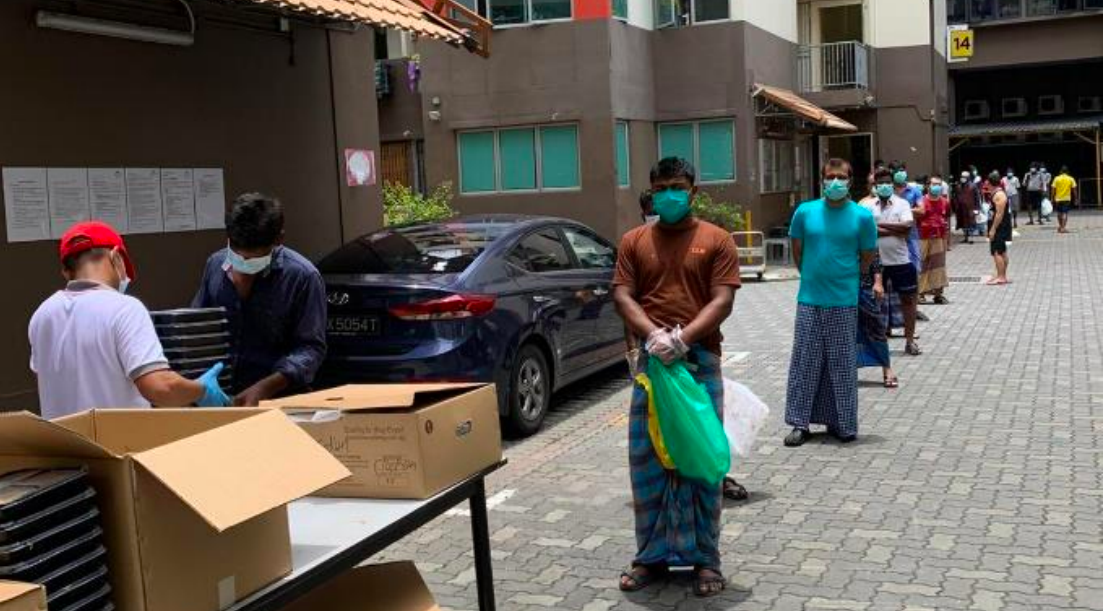 Quarantined workers queueing up for meals at S11 dormitory. “There is a pressing need to maintain worker morale and assure them that they will be looked after,” said Dr Jeremy Lim from HealthServe. Photo from MOM's press release.

Even as a new Inter-agency Task Force leaps into action to improve living conditions at three dormitories affected by the COVID-19 outbreak, NGO HealthServe is racing to meet another pressing need amongst foreign workers: That of mental well-being.

This week, HealthServe, a nonprofit serving the migrant worker community in Singapore, is rolling out counselling for migrant worker patients hit by COVID-19.

The NGO has moved quickly to stem a mental health crisis before it erupts.

With approximately 20,000 foreign workers now quarantined for two weeks in three dormitories in response to infection clusters, there are growing concerns about workers’ state of mind.

Even as HealthServe grapples with plummeting numbers of volunteer doctors – regular volunteers numbered over 100 before Dorscon Orange, and has been hovering at single digits since – the NGO has moved quickly to stem a mental health crisis before it erupts.

Counselling support for the workers is being ramped up this week via remote means, using commercially available tele-commuting software.

“There is a pressing need to maintain worker morale and assure them that they will be looked after,” Dr Jeremy Lim, the Medical Services Committee Chairman on HealthServe’s Board of Directors, told Salt&Light.

While most volunteer positions are closed due to Circuit Breaker measures, the NGO is calling for doctors, translators and counsellors to step up. (See sidebar).

Rising above the fear

The ripple of concern over mental health among foreign workers began in February, when a 39-year-old Bangladeshi worker was warded in ICU over COVID-related issues. (He is reported to still be sedated in ICU.)

When news broke, the reaction in the foreign worker community was rapid and widespread.

“There is much fear and deep anxiety, almost hysteria, among some quarters in the migrant community,” HealthServe founder Dr Goh Wei Leong told Salt&Light.

“Patients look to us not as doctors or nurses but as essentially a community of carers.”

Foreign workers whom HealthServe staff saw were candid in saying they were trying to get home because their young wives and parents were calling for their return, reasoning that no amount of money was worth their life.

Volunteer doctors and staff at HealthServe’s clinics quickly realised that, while their primary business is to provide clinical care, emotional and mental wellness are equally critical.

“Like it or not, patients look to us not as doctors or nurses but as essentially a community of carers,” said Dr Lim.

“If we’re panic stricken, it shows. We need to take sensible precautions, wearing a mask and all, but we still need to spend time with them, assuring them.

“The clinic has to be this oasis of calm and reassurance. As is commonly said, courage is not the absence of fear but rising above the fear.”

Dr Goh agreed. “As believers, we must be that beacon of hope and reflect the peace we have in Christ. Be a non-anxious presence in a time of uncertainty.”

“Singapore talks about the importance of psychological defence. There are vulnerable groups that would benefit just as much,” said Dr Lim, who is also CEO and co-founder of AMILI Pte Ltd, and co-director of the Global Health Programme in the NUS Saw Swee Hock School of Public Health.

“If we walk in the workers’ shoes – for many of them it is their first time out of Bangladesh, to a foreign culture, foreign language, foreign food.

“And, on top of that, many of them come from rural communities. They may have undergone very, very rudimentary training in carpentry, electrical work. And they’re suddenly passed into modern metropolis Singapore, and expected to know all of these skills which they may have learned only recently.

“We are returning to social determinants – the food you eat, the air you breathe, the environment that you are in.”

“It’s not dissimilar to the domestic worker who was a farmer’s daughter until two weeks ago, and then came to Singapore for a quick induction programme, and they’re put into a stranger’s home.

“The dislocation stressors are real.”

Added to this may be salary disputes or injuries that prevent them from working – causing greater stress, as they are in Singapore to be economically productive, in order to provide for their families at home.

“So even though our core business is clearly healthcare, holistically there are many other concerns for a migrant worker,” said Dr Lim.

“Singapore has emphasised a biomedical model of healthcare. There is a drug, there is a virus, there is a molecule. Whereas if we overlay clinical medicine with its public health origins, then the term ‘social determinants of health’ really comes to the forefront.

“With ageing and with chronic diseases becoming rampant in Singapore, we are returning to these social determinants – the food you eat, the air you breathe, the environment that you are in.

“So if we take a more holistic view of health, then focusing on the environment, focusing on mental stresses and so on, become very natural.

In February, as the coronavirus epidemic was beginning its crescendo, Dr Lim flew to Dhaka, the capital of Bangladesh, to speak to local universities, NGOs and healthcare providers in both public and private sectors about how best HealthServe could provide psychological support to Bangladeshi workers in Singapore

He had just one question: What can we do?

Even before COVID-19 erupted, HealthServe’s management and board of directors had asked themselves: Beyond physical health – the cuts and bruises and diarrhoea – where are we most needed?

Collectively they decided it was in the area of mental well-being.

“Beyond physical health – the cuts and bruises and diarrhoea – where are we most needed?”

In Dhaka, Dr Lim found that “the Bangladeshi health system, like the Filipino one, recognises that the overseas worker is an important part of the economy”.

Authorities told him the government was very serious about supporting their overseas workers.

As a result, HealthServe is working with Bangladeshi organisations to produce a counselling phone app for workers in Singapore.

“When it comes to emotional issues, language and context are crucial. And, much as we want to help, culturally and linguistically we are very different,” said Dr Lim, adding that a partnership with Bangladesh was ideal.

“Thankfully, when it comes to mental well-being, psychiatry or psychology are probably the specialties that are most amenable to remote support.

“The younger population, too, is much more comfortable with not being face to face. So the digital tools that allow for connectivity across borders are very amenable.

“Human interactions are very important. But they are limited to the workers who can physically come to the clinic. It would be wonderful if we can ramp up psychological support among the foreign workers.”

With coronavirus fears simmering, HealthServe is advancing its counselling services as well as expediting production of a helpline that will be culture- and language-specific to Bangladeshis.

Why the focus on Bangladeshis?

“We have found that the largest group that seems to have psychological stresses is the Bangladeshi population, which experiences a strong sense of stigmatisation,” said Dr Lim.

“The Chinese workers speak Mandarin – the existing systems that are built for the Singapore community seem to work well enough for them.”

As HealthServe battles to care, and care well, for the distressed foreign workers at their doorstep in the midst of an acute shortage of resources facing NGOs worldwide, Dr Lim gave a nod to the tireless volunteers at all NGOs.

“They are heroes,” he said with emotion.

He recalled walking down Orchard Road before Circuit Breaker measures – “you really worry for the shopkeepers, you worry for the taxi drivers”.

“In February I was heading to HealthServe to run the clinic and I ordered a Grab. The first thing that the driver said was, ‘Thank you, thank you. I waited 90 minutes for one call. When I was a few minutes away from you, I prayed very hard that you wouldn’t cancel before I reached.’

“So these are economically very, very challenging times. And for those of us who have that little bit of extra bandwidth, whether it’s financial, or whether it’s in time or skills, it is an honour and a privilege to be able to give back.

“One day, we might be the ones worrying about where the next meal will come from.”

With Circuit Breaker measures in place, most volunteering roles at HealthServe have been stopped. However these volunteers are urgently needed:

Financial donations are also welcome, as medical costs are set to rise.

If you would like to help in any of these areas, you can register at HealthServe’s online portal.

Lessons from a wheelchair deliveryman

"This crisis will bind us even stronger in our commitment and resolve to support one another": Muis letter to Bishop Terry Kee