A phone call from an old friend stirred Pastor Nant Nan Dar Aye's heart to minister to HIV sufferers. The ministry has since grown and even saw God heal three women of HIV! Photo courtesy of Cornerstone Community Church.

“I knew that when I started caring for these HIV-infected people, there is a chance my family and I can get infected. So, I’m prepared. I told God, ‘If I’m infected also, no problem. I will continue to serve for the remainder of my life’,” said Pastor Nant Nan Dar Aye, 42, of Explosion Cornerstone, a church based in Yangon, Myanmar.

Trained as a nursing assistant, she would regularly help those suffering from human immunodeficiency virus (HIV) to dress their wounds.

“Sometimes, there is a lot of the blood and I need to help them every day. Yes, if I have an open wound, I could get infected, but love overcomes everything; it overcomes fear.” (1 John 4:18)

Pastor Nan Dar stumbled into the ministry 12 years ago, at a time when new HIV infections were at an all-time high in Myanmar.

It all began with a phone call.

An old friend rang, asking if she could visit him in the hospital after getting word that she had been praying for the sick. She went to see him that very day in 2007.

“I’ve got HIV. If I’m not around, please take care of my wife,” pleaded the former drug addict. The very next day, his heavily pregnant wife, Pann (not her real name), rang Pastor Nan Dar from the hospital, crying. Her husband had died.

The love and care that she showed shocked the patients because even the nurses and doctors treated them poorly.

She rushed down to comfort the widow. Medical checks revealed that Pann, too, was infected.

“Many in Myanmar – myself included – didn’t have much knowledge about AIDs (Acquired Immune Deficiency Syndrome) and HIV then,” said Pastor Nan Dar. “Her parents and relatives shunned her.”

Pastor Nan Dar took her in, ministered to her and accompanied her for hospital visits. Pann gave birth to a son the following month but he didn’t survive beyond a month.

It was during the weekly hospital visits that she met many more afflicted by the disease – widows, single mothers and their children. They all faced the same problems as Pann.

One by one, she invited them to stay with her – seven women, along with their eight children.

“When I started this ministry, they will come and stay with me, eat with me, sleep in my house,” shared Pastor Nan Dar. The love and care that she showed shocked them because even the nurses and doctors treated them poorly.

Many that she took in often expressed their affection for her and her children by kissing them and hugging them.

She had two children then, who were just five and one. (A third child was born later.) Her relatives who had no clue how HIV/AIDS was transmitted, feared the disease could spread to her children. “In the early days, I was worried also,” she admitted as she, too, didn’t know much then. “When they kiss my children, will they get infected*? But love makes you brave. Love gave me boldness.

“It was a very challenging time … I cried often,” recalled Pastor Nan Dar when the fear and tension at home got to her. “But I never gave up. I kept praying, keeping my eyes on the prize.” (Philippians 3:14)

God had put these precious people in her life and had moved her heart to care for them. She simply could not turn her back on them.

According to the United Nations, Myanmar has the third highest HIV prevalence among 10 Asian countries, trailing just behind Thailand and Cambodia.

But it is not just the infection rate that is worrying.

During one of her hospital visits in 2007, Pastor Nan Dar asked a grandmother, who had a number of children under her care, whether she could pray for them.

“Are you a Christian?” asked the grandmother.

“You better go back now. I adopted these children after their parents died of HIV. I have HIV too and don’t have much time left. You Christians say God is love but your orphanages won’t take in these children just because they have HIV. I don’t like your kind of people.”

Those words jolted her.

She cried as her heart broke. Undeterred, she asked for permission again. The grandmother, seeing her tears, relented.

As she continued to visit them, that first encounter weighed on her heart.

“God, what would you like me to do?” Pastor Nan Dar asked.

After about a week, God pointed her to Jeremiah 31:3. He told her: “If you want to start this HIV orphanage ministry, you need to have an everlasting love.”

She sowed prayer into the matter.

Starting an orphanage with $10

In May 2008, Cyclone Nargis tore through Myanmar, claiming an estimated 140,000 lives and affecting some 2.4 million people. The cyclone also left behind thousands of orphans.

“Now is the time to start an orphanage,” God told Pastor Nan Dar.

“God, if you want me to start this ministry, please send the kids and helpers,” she prayed.

And He did. She started the orphanage that very month, with 12 kids in tow.

“I’ll never forget that day because I only had 10,000 Myanmar kyat on me,” she recalled with a laugh. That was the equivalent of S$10.

Again, her relatives questioned her decision but she was steadfast, trusting that the Lord would provide.

God provided a place for the children to stay – her brother allowed her to house the children in his home for free. She also recalled how she frequently managed to buy enough food for everyone with just 100 kyat (10 Singapore cents)!

One day, however, she spent her last cent and had no money left for food the next day. As was her habit, she committed the matter to the Lord, trusting that He would provide. (Philippians 4:19)

The very next day, a Canadian missionary visited the orphanage to pray for the children. Before she left, she pressed US$50 into Pastor Nan Dar’s hands: “God asked me to bless your ministry.”

And that has been how God has been providing for the ministry. Pastor Nan Dar is, herself, a volunteer and draws no salary because she believes it is a faith ministry.

“I’m not worried about the money because every time, just in the nick of time, He provides. That day till now, I have yet to finish spending that S$10,” she said with a grin.

The lack of public education about HIV/AIDS  and misconceptions on how the infection is spread continue to contribute to the stigma that HIV sufferers face in Myanmar. The stigma also persists within the healthcare system, where patients with HIV complain of institutional neglect by nurses and doctors.

The rejection faced by HIV sufferers often drive them to the brink of suicide. To tackle this, Pastor Nan Dar takes time to hear them out, to understand how they are feeling.

“The most important thing is you need to show the love of God … You cannot give them hope, only God can.”

“The most important thing is you need to show the love of God. Because love never fails. You cannot give them hope, only God can. (Romans 5:5) I believe that is the only way they can move forward,” she said.

When the opportunity presented itself, she would share the Gospel with the HIV-infected women and children under her care and many came to accept Jesus as their Lord and Saviour. To ensure they kept growing in their spiritual life, she sent them to other churches.

Unfortunately, they were turned away as these churches were worried their members would be infected.

Discouraged, she sought the Lord again.

“We were praying together, eating together and our gathering became a church … it was not my plan. I didn’t want to become a pastor,” she said with a sheepish chuckle. The church she started, Explosion Cornerstone, is affiliated to Cornerstone Community Church, Singapore through the Cornerstone Global Network.

“The miracle is we have three women who have been completely healed from HIV. God healed them! Now they’re leaders in the HIV ministry, so we work together to show God’s love to the people who come to our church. 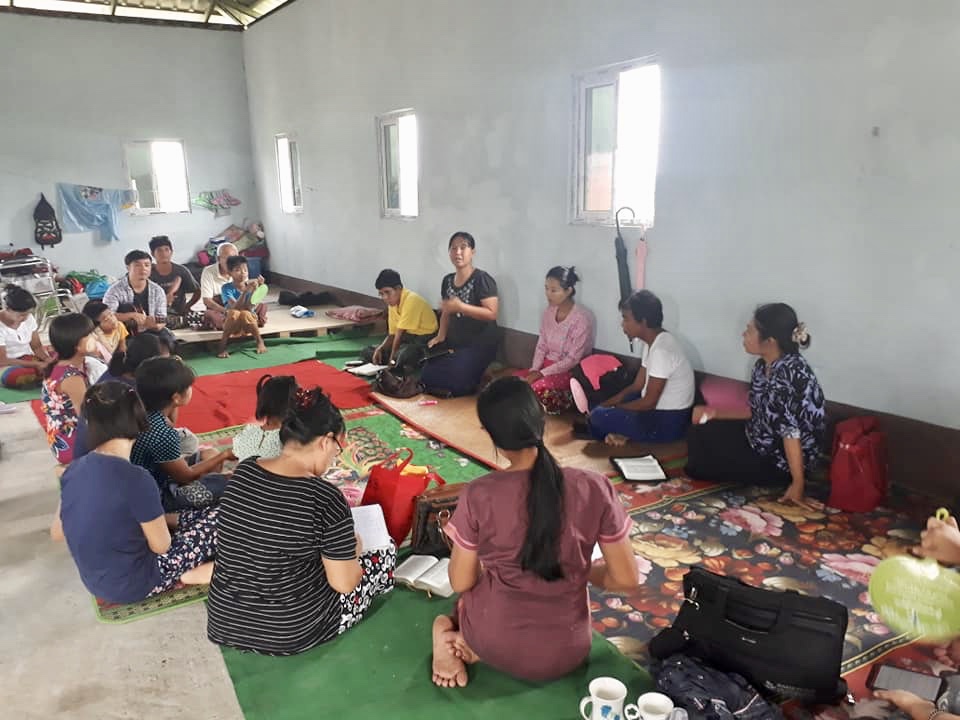 “More than a hundred people turn up for our Friday service. Most attendees are from the poorest places in Yangon. Many are HIV sufferers, homeless, or have a handicap.

“We work together to build relationships with those who come. God is good to have brought us together!” beamed Pastor Nan Dar.

The Lord has grown the HIV ministry as well. From one house, her own, they now have more than 20 houses (some rented, some belonging to volunteers) where women with HIV can stay and be ministered to.

While living with HIV is tough, the hearts of many of the women are filled with gratitude.

“They thank God because, through the HIV ministry, they got to know the love of God, they heard about Jesus Christ and they got saved. That is a big present for them,” said Pastor Nan Dar. “They are no longer sad. They are happy, living life to the fullest.”

Today, the church continues to grow in tandem with her HIV ministry. The Lord has expanded her heart to care for the poor and needy. By God’s grace, she was given land and funds to build two simple houses – one for the orphans and the other for the homeless and handicapped. Pastor Nan Dar (extreme right) together with the residents staying at Mercy Buildings, behind them. Photo courtesy of Pastor Nant Nan Dar Aye.

“God asked me to help them. I want to bring them to a place that can be a home for them,” said Pastor Nan Dar, referencing Matthew 25:42-46.

“If you’re worried, ask God. If you feel you cannot love anymore, ask God to fill you to overflowing with His love.”

But beyond putting a roof over their head and food on the table, she hopes to eventually create jobs for them, which will help restore their dignity.

Many of the orphans that she cared for have grown up.

“Some have married, some are nurses, some are working in restaurants, some have become Sunday school teachers, and they worship in our church and volunteer in the various ministries. I thank God that we can work together to share the love of God!”

Her family is also supporting the work. Her husband, Pastor Isaac Aung Than, who initially doubted the wisdom of the ministry, is now her ministry partner. He ministers to the men and oversees the prison ministry. Both pastors’ siblings offer financial support and help out when they are not at work.

“I believe God is our provider, whatever He ask you to do, He will provide everything. But we need to have faith. If you’re worried, ask God. If you feel you cannot love anymore, ask God to fill you to overflowing with His love,” she said with the kind of smile that comes from having tasted God’s goodness over and over in her life. (Psalm 34:8)