In 1999, after crewmembers from Doulos played a part in peace talks in Papua New Guinea, UN ambassador, His Excellency Mr Noel Sinclair, said of the Doulos community: "Your floating missionary group of more than 30 nationalities is a demonstration of the reality and effectiveness of unity and reconciliation among people." Photo by Tom Brouwer, OM Ships International, published with permission.

In more than 100 years of rich history, Doulos served — and continues to serve — as a channel of God’s goodness and grace.

Even though the MV Doulos, which means “bondservant” or “slave” in ancient Greek, is no longer sailing from shore to shore to share the Gospel, its purpose as a vessel for Christ lives on under the ownership of businessman Eric Saw, who has pledged all of the hotel’s profits to charity.

The ship may just be a shell, but it has contained more than 100 years of rich history as it served — and continues to serve — as a channel of God’s goodness and grace.

Here is a photo essay looking back on Doulos’ significant milestones as God’s faithful bondservant.

Constructed in 1914, the MV Doulos is listed in the Guinness Book of Records as the world’s oldest ocean-going passenger ship. She previously sailed under three names — Medina, Roma and Franca C — before becoming a missions boat under OM. SS Medina, named after a river in Texas, was built in 1914 by the Newport News Shipbuilding and Dry Dock Company in the United States. It was commissioned into service along the west coast of America during World War II by the US Coast Guard, and was responsible for freighting onions. Photo courtesy of and © OM Ships International. Published with permission. 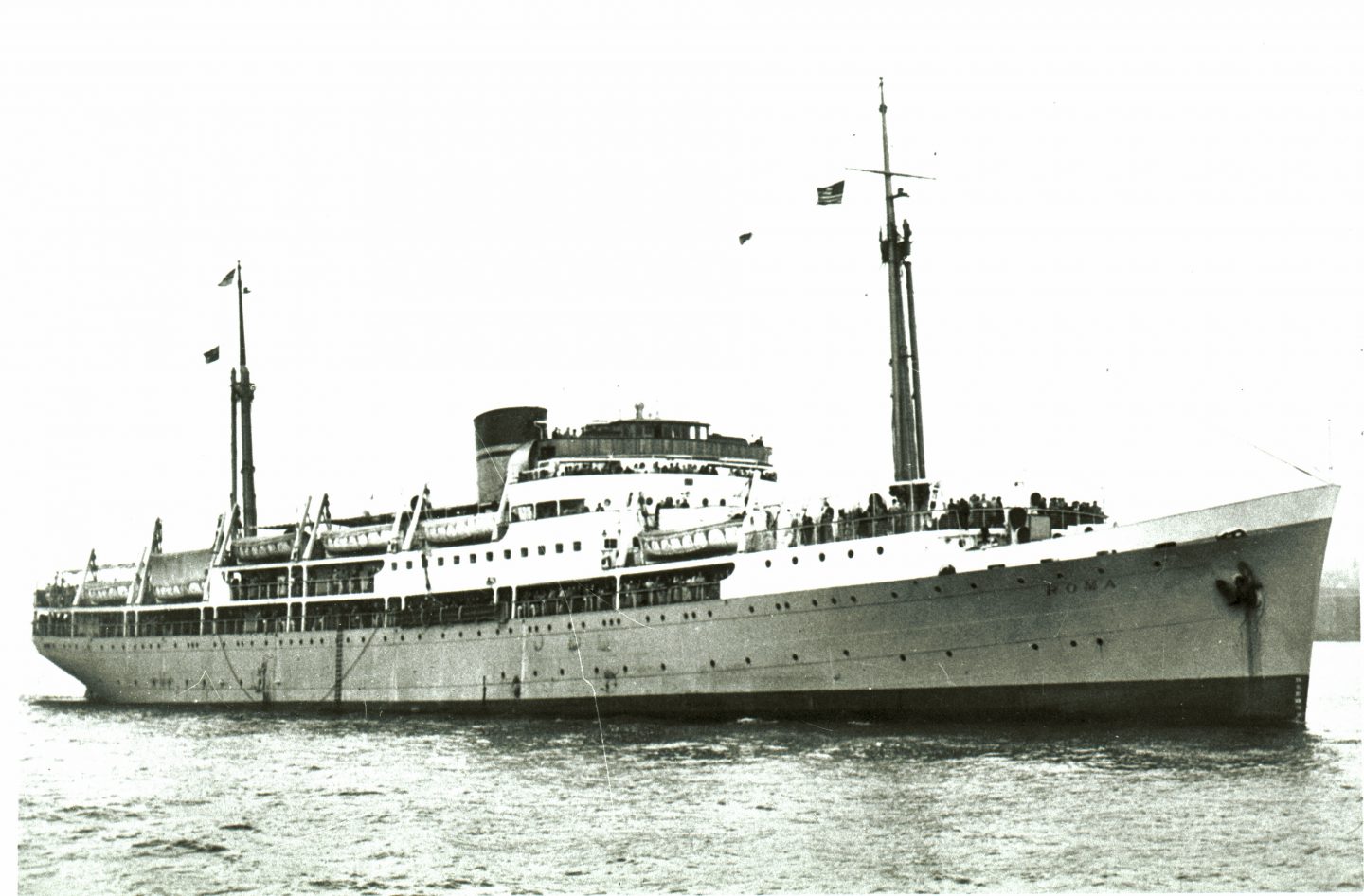 Medina was renamed Roma in 1949 and converted into a passenger ship. In 1950, during the Roman Catholic Holy Year, it was used to transport pilgrims to Rome, and afterwards carried emigrants to Australia. Photo courtesy of and © OM Ships International.Published with permission. Roma was sold in 1952 and renamed Franca C. It was later remodelled into a first-class luxury liner in 1959, and travelled around the Mediterranean ports with occasional trips into the Black Sea. Photo courtesy of and © OM Ships International.Published with permission. In November 1977, SS Roma was bought by Christian charity Good Books for All (GBA) and became OM’s second ship after Logos. It was renamed Doulos, a Greek name meaning “bondservant” or “slave”, and used in Scripture to describe Jesus Christ (Philippians 2:5-8). OM wanted it to return to Latin America, where the organisation’s work had first started in 1957. Photo courtesy of and © OM Ships International. Published with permission.

A roaring start in Latin America A crowd waiting to get on board Doulos in Rosario, Argentina, on May 26, 1979, at a stop during its maiden voyage. Photo courtesy of and © OM Ships International. Published with permission.

After sailing to its first nine ports in Europe, Doulos arrived in Tampico, Mexico on December 4, 1978 — the first visit to Latin America by an OM ship. It spent five years (1978-1983) in and out of the region, welcoming more than 4.1 million visitors and distributing over 400,000 copies of Christian and educational literature.

In September 1991, two hand grenades were thrown at the team performing at the Doulos International Night in Zamboanga, Philippines.

Doulos is fondly remembered as the initiator of the mission movement in Latin America. After setting foot in the region, the ship’s volunteers fanned out to share their faith and the need for world missions.

Their message was eagerly received by many locals who later gave their lives to spread the Gospel. Most of the Latin missions agencies today trace their roots to Doulos and the OM teams that brought a mission mindset to the local church.

In 1970, only 4% of the Latin American population identified as evangelical. Today, 20% does so.

“The continent is no longer considered a mission field, but rather a mission force,” said an article published in OM’s 60th anniversary magazine. One of the over 30 victims of the 1991 terrorist attack at a public Doulos presentation being wheeled away by medics. Photo courtesy of and © OM Ships International. Published with permission.

In September 1991, two hand grenades were thrown at the team performing at the Doulos International Night in Zamboanga, Philippines. Two team members, Karen Goldsworthy and Sophia Sigfridsson, were killed and over 30 others were injured.

Despite the evil and atrocity that happened, many locals committed to following Jesus the very next day. When OM’s fourth ship, Logos Hope, was commissioned in 2009, two meeting rooms on board were named after Karen and Sophia, and their story is told on ship tours.

A platform for peace in Papua New Guinea Peace was restored on the Papua New Guinean island of Bougainville through Doulos’ visit. Here, then-president Joseph Kabui (right) is shaking hands with a leader of the opposing side, Joseph Watawi, as enemies reconcile after a decade-long civil war. Photo by Tom Brouwer © OM Ships International. Published with permission.

In September 1999, Doulos sailed towards the Papua New Guinean island of Bougainville, where a ceasefire had just been declared after a decade-long civil war.

By divine orchestration, David Short, a ship ministry worker who was helping the advanced preparation team, met the then-president of the Bougainville People’s Congress and the interim leader of the island, Joseph Kabui, at a diner.

Doulos has travelled the equivalent of almost 17 times around the world.

After Short told Kabui about Doulos’ upcoming visit, the latter asked if Doulos could hold a seminar on prayer for the island’s new leaders and a workshop on good governing principles! This would be the platform that God used to bring about reconciliation in Bougainville.

In OM’s 60th anniversary magazine, then-director of Doulos, Lloyd Nicholas from Australia, said: “The leaders of the two factions each came with about 30 of their senior people. They sat separately from one another and did not interact much. Then on the third day, delegates who’d been rivals — even enemies in combat — publicly released their bitterness and sought forgiveness from one another.”

A reconciliation ceremony was held on the ship’s final day in port, September 21, 1999, which also happened to be the United Nation’s (UN) International Day of Peace.

The UN ambassador, His Excellency Mr Noel Sinclair, had this to say about the Doulos community: “Your floating missionary group of more than 30 nationalities is a demonstration of the reality and effectiveness of unity and reconciliation among people.” Captain PJ Thomas from Singapore speaking at the closing ceremony of the reconciliation process of two factions in the civil war. Photo by Tom Brouwer © OM Ships International. Published with permission.

Volunteers on board Doulos sailed to 601 ports of call in 108 countries and territories, hosting locals — sometimes even royalty — at the ship’s book exhibition and dining hall, putting up performances and travelling out to provide aid and company wherever needed. Traditional dancers at the official opening ceremony in Kaohsiung, Taiwan, in March 10, 2007, pulled the then-Captain Ashley McDonald (second from left) and other crew members into their circular dance. Photo by Ester Caruso © OM Ships International. Published with permission. Doulos welcomed visitors from all walks of life, including this Buddhist monk who picked up a Christian book and read it with interest at the book fair in Sattahip, Thailand, in September 2006. Photo by Stephanie Vaupel © OM Ships International. Published with permission. Teams were often sent out to visit and care for locals. Here, volunteer Sandrine Ray spends time with a woman with leukaemia during the ship’s visit to Lae, Papua New Guinea, in early 2008. Photo by Ester Caruso © OM Ships International. Published with permission.

After 32 years of faithful service, Doulos’ ministry came to a close on December 31, 2009, after surveys by marine safety authorities confirmed that major repairs amounting to more than €10 million were required to keep the ship safely in service.

It was a cost that the OM Ships’ executive leadership team and board felt was not appropriate to invest in, given the ship’s age and limited future.

By the end of 2009, Doulos had travelled more than 360,000 nautical miles — the equivalent of almost 17 times around the world — welcomed more than 22 million visitors and sold close to 17 million books. December 26, 2009, was the very last day the ship’s book fair was open to the public. Doulos was docked at a berth at Vivo City in Singapore, marking its 18th and final time in the country. Photo by Maurits Luth © OM Ships International. Published with permission. 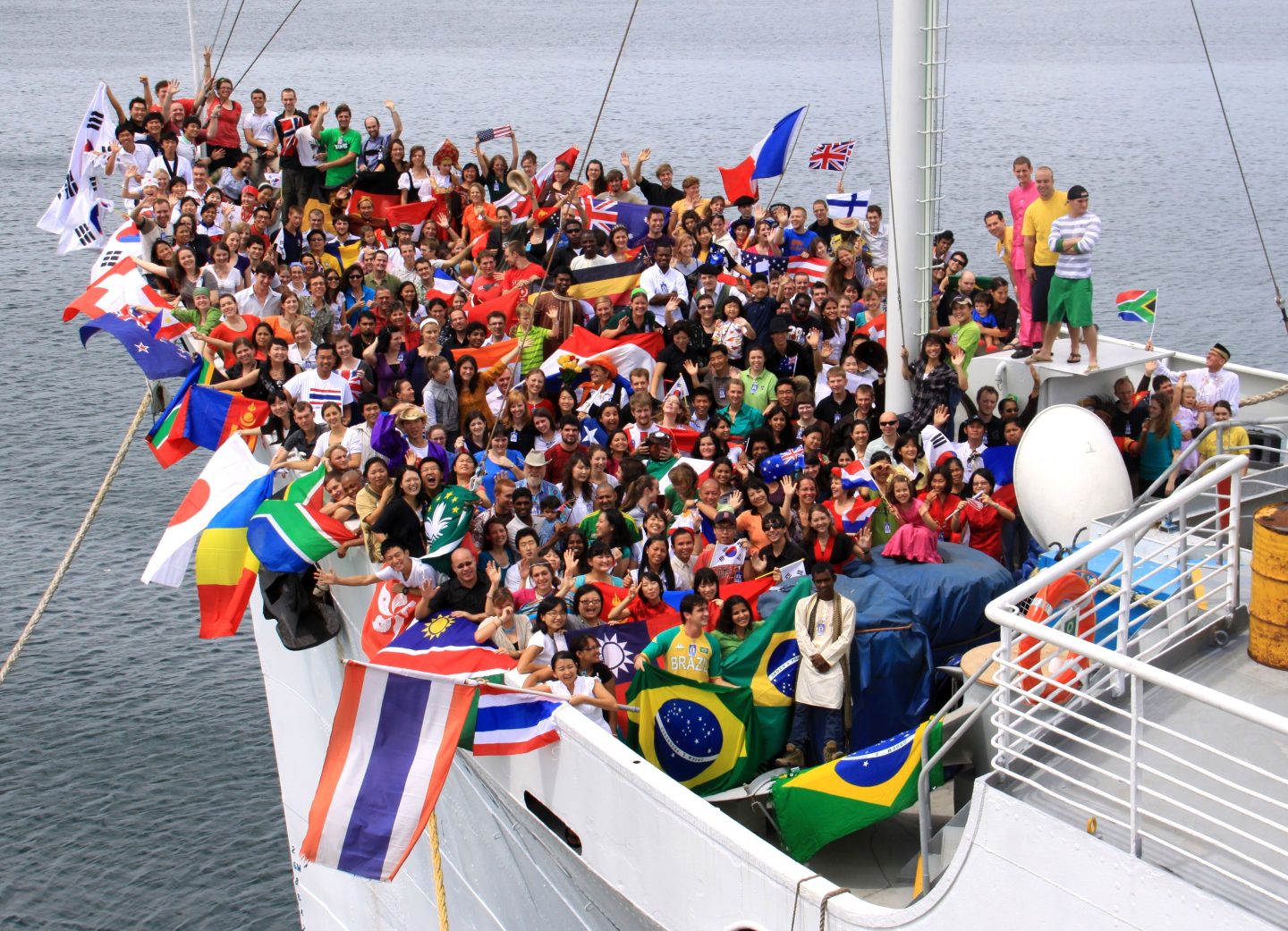 The final 320-strong crew and staff on board Doulos. Photo by Maurits Luth © OM Ships International. Published with permission. As Doulos’ term drew to a close, a rainbow appeared in the sky above the 95-year-old ship, serving as a reminder of God’s goodness and faithfulness throughout all these years. Photo by Maurits Luth © OM Ships International. Published with permission.

In 2010, Christian businessman Eric Saw, 64, rescued Doulos from the scrapyard by purchasing it for S$2 million, with the intention of repurposing it into a modern ship hotel that would hold symbols — like its staircase and some old cabins — of its 100-year-long history.

He renamed it Doulos Phos, which means “servant light” in Greek. Although its physical body had been repurposed, Saw was determined to continue using the ship as a vessel for the Lord by committing to dedicate all of the hotel’s profits to Christian and secular charities. After almost a decade of planning and refurbishment, Doulos Phos now sits on a 1.4-hectare site beside the Bandar Bentan Telani ferry terminal in Bintan, Indonesia, just an hour’s ferry ride away from Singapore. The ship hotel has 104 rooms, ranging from backpacker’s cabins nestled within the ship’s hull to a multiple-bedroom captain’s suite on the top-most deck. On the land adjacent to the boat sits an infinity pool and spa rooms that boast vast views of the Singapore Strait. Photo courtesy of Doulos Phos. As a tribute to its rich history, each level of the hotel is named after the different names the ship has had: Medina, Roma, Franca C and Doulos. Saw has also left several parts of the ship’s old features untouched, including its engine room, which now serves as a museum. Photo by Tan Huey Ying.

Are you in a trial ... or a testimony in the making?

Ask Salt&Light: What if I’m too busy for my faith?