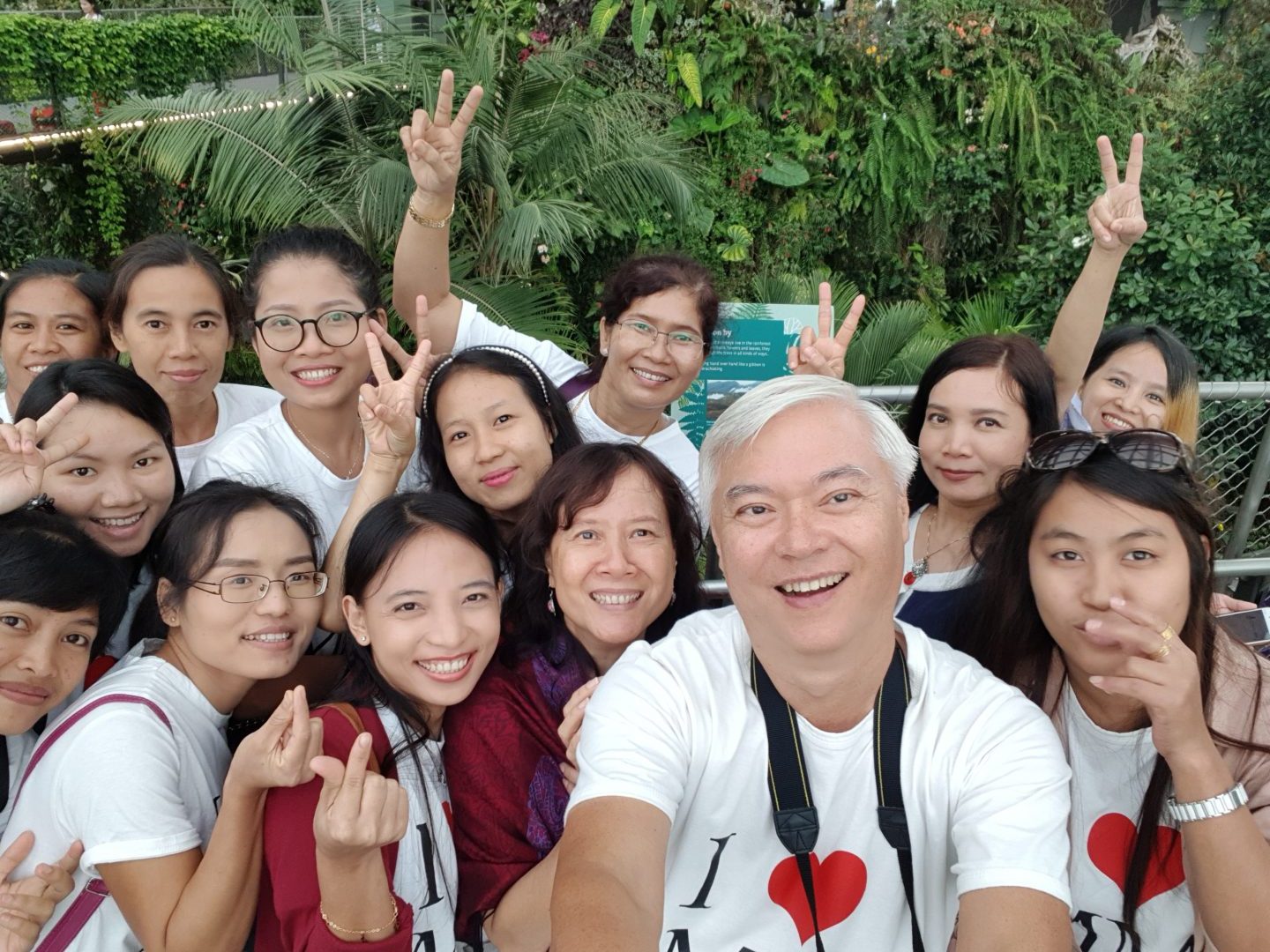 “There are 40,000 Myanmar girls in Singapore. If a church wants to send a missionary to Myanmar, I'd say no need, they're all here!”  says James Quek, managing director of MyHelper. All pictures courtesy of MyHelper.

At age 55, when most Singaporeans are contemplating how best to protect their nest egg for retirement, James Quek emptied his Central Provident Fund (CPF) account for a venture he had zero experience in.

“The Good News must lead to good works.”

He cleared his life savings to start MyHelper, a maid agency specialising in providing foreign domestic workers from Myanmar. The agency is also accredited with the Indonesian and Philippine embassies in Singapore, and can bring in domestic helpers from those countries.

To run a maid agency seems an unlikely move for this former journalist and communications professional who had worked in The Business Times, NUS Business School and World Vision.

Quek, 61, says of his various ventures: “There’s always a season for everything. It sounds and looks like a big change, but it is exactly the same mandate: To reach out to the poor, to the widow and to the foreigners in our land (Deuteronomy 10:18).” The idea of starting a maid agency resonated with James Quek at a pastors prayer summit in Malacca, when talk turned to ministry to the sojourners in our land.

Smartly attired and silver haired, with a charming smile, the managing director of MyHelper could have easily be mistaken for the musician Dick Lee at a glance.

The mission field in our home

Since MyHelper started about five years ago, it has deployed about a thousand domestic maids into homes across Singapore.

It all started with a question from his Myanmar maid: “Sir, why don’t you start a maid agency?”

“Every Sunday she’s like a big mama to all the Myanmar maids who come crying for help because they were bullied by the employer and ignored by the agency,” Quek recalls.

What seemed to be a random seed of a thought soon germinated. “At that time, I was finishing my six-year stint at World Vision. I thought about it and went for the Pastors Prayer Summit in Malacca. The idea resonated because, at the summit, we also talked about ministry to the poor and sojourners in our lands.

“If Christians see maids as a mission field, there will be a great transformation in the market.”

“Helping the poor and vulnerable is part and parcel of the Gospel and discipleship (Micah 6:8).

“My career at World Vision has taught me that the Good News must lead to good works. Helping the girls, protecting them from bad treatment and exploitation, is the good works part to the industry God has called me to.”  (Matthew 25:35-40)

For Good News, MyHelper partners with the Church of Singapore. “When I started the business, I immediately looked for pastors whom I could work with. The church started an outreach service from my office with about seven people. Today, they have a congregation of about 100 and have moved to bigger premises elsewhere.”

The church is also invited to share and connect with staff and domestic helpers at the outings MyHelper organises. “It’s a captive audience and the pastoral team is my primary vehicle to vocalise the Gospel,” Quek says.

From maid abusers to maids who turn violent on their charges, the sector has often made news headlines for the wrong reasons. Quek resolved that his agency, MyHelper, would be set apart from the rest.

To start off, instead of resorting to traditional sources and networks to bring in his agency’s maids, which is the easiest route for a start-up, Quek was adamant that he would start from scratch. “On my trips to Myanmar, I would go to the Bible Society Singapore and come back with a suitcase of bibles,” says James. MyHelper has three training centres in Myanmar.

“Myanmar agents from established supply sources generally charge the girls a higher fee to work here, so I decided not to plug into that supply chain but create my own.

“For the sake of Christian integrity and our sense of fairness, we are willing to take a knock once in a while.”

“I had to start three training centres in Myanmar, and found Christian partners who were like-minded, with a Kingdom perspective. They agreed to earn less as part of the ministry.

“Instead of charging the girls a typical seven months of their salaries for work placements, we have them pay us five months. This means the girls come here with a lower debt burden.”

Quek explains further the dollars and cents of operating a maid agency: “As a business, we have fixed cost. For example, it costs me $3,000 to bring a domestic worker to Singapore.

“But if the employer is only willing to pay $500, it is a zero-sum game for the agency. The money must come from somewhere, and right now, in the industry, it typically comes from the maid.” The girls are taught different skills in MyHelper training centres before they are sent to Singapore to work.

The irony of the current circumstance is that Singapore employers pay much less than the impoverished girls for the overall placement fee.

Quek hopes for a turnaround of the current situation. But right now, he is still backed up against the endemic market practices that have taken root over the years.

“Common sense says to turn things around and for the employers to pay more. But if that is the way things are done all this while, employers will think, ‘Why should I pay more?’

“What we are looking at is a systemic problem with market practices in the industry,” Quek says. “It is in our Christian DNA to reach out to the vulnerable; you don’t need any more reasons beyond that, financial or otherwise,” says James Quek. MyHelper organised a New Year Party at the end of December to usher in 2019. They have quarterly events for the foreign domestic workers they have deployed.

The girls continue to queue up for employment that promise a glimmer of hope out of poverty, paying a cost they hardly understand.

They forgo months of salary because they cannot cough up the commission up front.

“It is only after working several months that they realise, ‘How come I still don’t get my salary?’ Many do not dare ask even after nine months have passed. By that time, it’s already too late.”

While changes to the industry may take time to come, MyHelper is doing what they can to help the girls from the time they set foot in Singapore.

“Before the girls are deployed, they stay in a lodging house with two Christian Myanmar staff I intentionally recruited. When they arrive in Singapore, the girls are looking for mentors, a big sister, so they find friendship in their chaperones.

“That’s where the ministry of the Gospel begins. The girls keep in touch with my staff throughout their two-year stay in Singapore and will go to them whenever they need counselling.”

Every quarter, MyHelper organises outings for the maids to different tourist attractions to enjoy themselves and connect with others from the community. Birthdays are also remembered and celebrated. “When the maids are away from home, they need another place that they can call home. Though they are far away, they know they are not forgotten. Each maid gets a simple birthday present to remind them they are loved and valued.” – MyHelper website

The foreign domestic workers are also encouraged to take classes to upgrade themselves to prepare for lives after Singapore. For those who attend classes diligently, the agency gives a 50% refund of the fees to any course of their choice.

According to the Ministry of Manpower, only one in two foreign domestic workers stays with the same employer for more than a year. That means about half are unlikely to complete their two-year contract. “The dynamics of an employer-maid relationship are very complicated and for various reasons. We are therefore proud of our girls who have successfully completed one full year of employment with one employer.” – MyHelper website. Naw Sar Htoo Ray (left) receiving her end of contract award from James Quek’s wife, Wai Yee.

Quek has also encountered maids who want out after working only several days.

“Your helper is a captive audience for two years. You can do lots for her as a person and her belief.”

“We don’t know why they don’t want to work. It is baffling. Our agency can simply say to the employers: “Sorry, it’s the luck of the draw. You had chosen and interviewed the girl yourself.

“But in these cases, I had to take care of the employers and gave them a full refund or a replacement maid even though it’s not contractual.

“That’s where the integrity and fairness comes in. I may suffer financial loss, but for the sake of Christian integrity and our sense of fairness, we are willing to take a knock once in a while.

“This industry is such that if you want to make money, you can exploit the employers and the girls.”

MyHelper is resolved to operate differently.

A brand for good

Quek’s efforts have not gone unnoticed. In 2018, MyHelper won the Brands for Good inauguration award in recognition of its efforts for fair employment practices. “What’s important is God’s call in individual lives. God has called me to start this business, so I just did,” says James, seen here receiving a Brands for Good (BFG) 2018 award for fair employment practices.

As the company celebrates its fifth anniversary, Quek counts his blessings. “I used my CPF money and was prepared to lose that sum. Thank God I have not lost money; we have broken even so we can still go on for long time doing good. It’s quite a big task and it is not finished.

“I hope Christian families will see it a ministry. You have your helper in your house, and she is a captive audience for two years. You can do lots for her as a person and her belief.

“If Christians see maids as a mission field, I think that will bring a great transformation in the market.”

As a service to the community, MyHelper is conducting a free seminar: Beware the Hidden Cost of Hiring a Maid.

The seven ‘C’s of family devotions

"God directed me from the beginning": Singaporean Lawrence Tong on leading Operation Mobilisation