The family car, the setting of many fond memories, was also a crucible for the author and his two daughters. Photo by Omar Lopez on Unsplash.

On the eve of Father’s Day, it dawned on me. I am blessed to enjoy four types of fathering relationships. One with each of my daughters. One with my earthly dad. One with whoever I chose to spiritually invest my life in. One with my Heavenly Father.

Of the four, it is the one with my daughters that has taught me unending lessons and has proven to be most challenging.

Why? I think it’s because it’s the one where the onus is mainly on me to initiate love.

I couldn’t fathom why little children couldn’t grasp that Daddy couldn’t drive while they were distracting me.

My earthly dad (God bless him, he’s 90 this year and still strong) and my Heavenly Father have done a lot to initiate love. I simply respond or … don’t. And when it comes to investing in others, any mentor knows that the mentee must first want to be connected before the relationship can take off.

Fathering has made me even more aware of how my Heavenly Father thinks, feels or acts (especially towards me). Few other settings, apart from marriage, have proven to have such a purifying effect on my walk.

My wife and I were eager for kids and thought they weren’t going to come. Our daughters were born only from our sixth year of marriage, two years apart. The girls are the literal millennials, born on this side of 2000. I was from the tail end of the boomers. I was close to 38 when our elder one arrived.

Whatever the age gap, like many a new dad, I agree that few things beat the experience of holding your child in your arms for the very first time.

Later I apologised. “I was upset but what Dad did was wrong.”

I happily embraced and tried to put into practice Josh Mcdowell’s seven principles of biblical parenting and shared them with others.

Some of our greatest memories as a family of four have taken place in our car. They include some incredible trips to Malaysia.

One time, instead of heading home after church and Sunday School, my wife and I snatched the girls away to Malacca. Our luggage was strategically covered in the back of our Kia Carens, our girls were unsuspecting of our plan.

I’ll never forget the moment I glanced into the rear view mirror and saw them squeal and whisper in delight when they uncovered the bags and realised that the car wasn’t going through the car park gantry at home but through the one at Woodlands checkpoint.

The car as a crucible

The only New Testament command for fathers is in Ephesians 6:4 and it starts in the negative.

“Fathers, do not exasperate your children; instead, bring them up in the training and instruction of the Lord.”

I found it strange to grasp as I thought I was the one often exasperated instead. And so while I was learning not to exasperate them, I wasn’t able to not let them exasperate me.

Ashamedly, that same car, the setting for many fond memories, also became the crucible of testing for me and for them. For me, it seems the theory and theology of parenting and disciplining children were often put to the test when I was driving.

I am known to most church members as a smiley and even-tempered person. Yes, passionate but mostly cool. Yet I often lost my temper while driving. Hypocritically, I even despised Christians who rather proudly told me they would curse and swear at drivers who cut in or who hogged the road. No, not me. I’m calm and able to exercise restraint. Or so I thought.

The Lord gives grace when we pause instead of react, when we are still instead of settling score.

Once when Mummy wasn’t around to help keep the peace between the squiggly, playful, taunting and end-of-the-day exhausted children, I snapped.

For some reason,  I couldn’t fathom why little children couldn’t grasp that Daddy couldn’t drive while they were distracting me with their backseat catfights and skirmishes.

I did what I knew best when affronted by bad behavior. I raised my voice in warning.

When that failed. I turned and threatened.

On the third infringement, in the perfectly timed fulfilment of prophecy, I turned and (dare I say this here?) used my hand. They each got a hard smack or two each on their legs even as they reacted in shock and some glee (well, one had better reflexes and managed to dodge). The rest of the ride would be peaceful after my outburst. But my heart was in terrible shape, half trying to justify my actions.

Later I apologised. “I was upset but what Dad did was wrong.”

To my surprise and their credit, they quickly accepted my spiel.

My elder one would be quick to add: “It’s ok, dad. Sorry for making so much noise too.”

Little did they know their child-like reflex preached louder than many sermons about God’s inexhaustible grace, infinite mercy and patience. For to be most like my Abba Father, wasn’t I to heed James’ wise counsel to be “quick to listen, slow to speak and slow to become angry”?

Regrettably, it happened again, though mercifully, I think only a few more times.

An excuse that often came to my mind was work stress. But I knew it was but an excuse. As I told my wife, it wasn’t right and I felt lousy.

I repented and resolved not to lose it anymore with these tender charges. Jesus was gentleness personified. And it’s true that “a gentle answer turns away wrath, but a harsh word stirs up anger.” (Proverbs 15:1).

Some years later, when the girls were in their early teens, something unforgettable happened. This time, the trigger came before the car ride.

I was to bring them out for dinner as my wife had an evening night out. (Go on, admit it, how helpless we dads can be without our wives.)

It was just after 6pm and my goal was to drive us to the nearby mall food court before it got crowded. I announced that we were to leave at 6.30pm, latest 6.45pm, so that we could reach there before 7pm.

Guess what? One finally strolled out of their shared room into the hallway at 7pm. I was upset with what looked like defiance. But she didn’t seem to get it. I was even more upset when the other daughter sauntered out without so much as a word of apology and proceeded to lie down on the sofa’s arm rest and began slowly combing her long, entangled hair before tying it up. It was what she always did, actually.

But that night, my anger saw an opportunity. I was standing at the door ready to leave, with arms akimbo, about to raise my voice.

While I was learning not to exasperate them, I wasn’t able to not let them exasperate me.

I stared quietly at my daughter on the sofa combing her hair. She was facing the other direction. And then the temptation to assuage my wounded pride came fleetingly but clearly.

I “saw”, in my mind’s eye, myself having an almost out of body experience: Leaving my body (at the doorway) and walking swiftly over to give her a soundly-deserved back-handed tight slap. It would be the perfect crime as she would not see it coming as she lay there. The horror of that instance snapped me back to my senses.

Nothing happened. My anger simmered down. Eventually we bundled out, now late, for dinner.

In the car, I was quiet and so were they. My hair-combing offender had chosen the front seat. Rather bravely, I thought.

Half way to the mall, while both our eyes were looking straight ahead at the road, she suddenly blurted out quietly: “Oh sorry, I kept you waiting, Dad …”

Surprised at the suddenness, I immediately replied: “It’s okay.”

I was about to explain to her why I was concerned about the crowd. But she stopped me in my tracks with her next line: “… And Dad, thank you for not being angry.”

I heard my heavenly Father’s voice affirm: “And thank YOU for not being angry.”

There in the car, I felt the overwhelming presence of the Lord. I knew this was from Him.

Catching my breath, I continued calmly, still not wanting to miss the chance to give my lecture: “And do you know why I was upset?”

She said she knew I wanted to avoid the crowd. She got that, she said.

The moment she spoke those words, I was certain a spiritual transaction had taken place. The car, the setting for previous episodes of out-of-control anger, had become holy ground.

For the rest of that ride, you could say the cloud lifted.

I shed tears of gratitude whenever I recall this, and I have never lost it  since.

Grace when we pause

Sure I still get angry and upset, sometimes when people disagree with or disregard me. But He’s always reminding me that it is what He thinks of me that matters more. No, most.

I have also learnt (and not just in this aspect of my work-in-progress) that the Lord gives grace when we pause instead of react, when we are still instead of settling score.I have learnt it is possible, by His enabling grace, and because He said as much in His word, to not only bite my tongue but run to Him even in wordless yet hopeful prayer for patience and deliverance. How else to pierce through the gathering indignation massaging the ego of my offended heart?

The older we men get, and the more experience we garner, we guys must fight that default, prideful tendency to lean toward a certain impatience with others: Sigh, shouldn’t they know this by now?

I have learnt it is possible to run to Him even in wordless yet hopeful prayer for patience and deliverance.

I write this piece with trepidation, aware I risk being judged, or worse, exposing my daughters. They are lovely and responsible young adults now finding their place in the world.

We still have our hits (I don’t mean physical, ah) and some misses. But I do know the Lord has spoken through them into my spirit on many other occasions.

With Father’s Day just over, I share this in the hope that you will be encouraged to press on in your own journey of sanctification, whether or not you are a dad. We need to keep on keeping on (or KOKO, as my fellow Elder recently put). And to be the CEO or Chief Encouraging Officer rather than Chief Exasperating Officer at home, as a dear friend and mentor once preached.

One big lesson for sure is to come back to this centrifugal truth: That what matters is how we view our core identity in Christ, that we are undeniably and inexplicably His. Or to put it as American author Max Lucado did: What should grip us is His grace.

That’s my girl! Find your way into your daughter’s heart 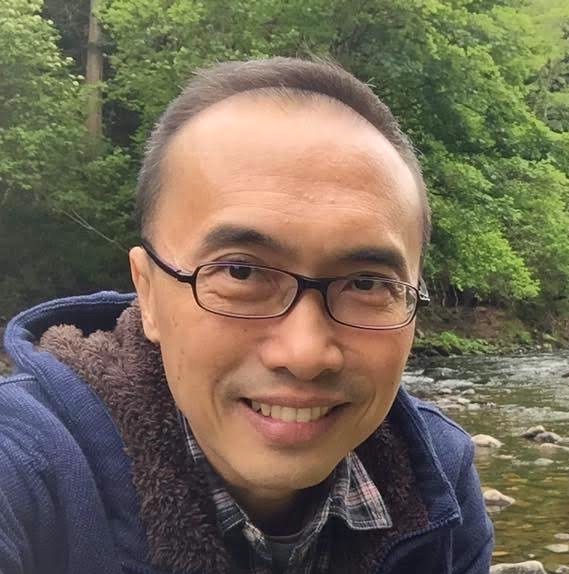 Jimmy Tan spent the first 11 years of working life as a TV producer, then served in Touch Media before working in the team that launched the Yellow Ribbon Project. Since 2006, he has served as a full time Elder at Bethesda Frankel Estate Church where he grew up as an angsty teen. He is doubly blessed by wife and mother who cook and feed him too well, and two young adult daughters who keep him sane on Indie and Pop offerings ahead of most others.