This Christmas, Salt&Light brings you stories from people who discovered that, even in the depths of despair, God Is With Us. 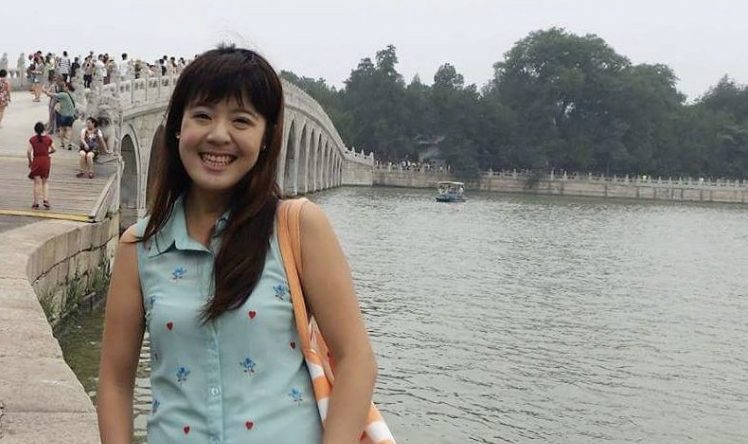 Rachel Teo, 31, found her life irrevocably altered after meeting with a horrific accident in 2011. But God was at work putting new purpose into her future. All photos courtesy of Rachel Teo.

The last thing Rachel Teo remembered was making her way to meet a friend. Then everything went black.

When she blinked open her eyes, the 21-year-old found herself in an unfamiliar room, with her body in casts and bandages. This is a hospital, she was told. You’ve been in a coma for two months.

She had been hit by a van while crossing the road. Her arms, legs and ribs were broken. Her jaw was crushed. A long scar – from a brain surgery done while she was in a coma – ran across her shaven head.

“This is a hospital. You’ve been in a coma for two months.”

She also struggled to think straight. Later, she was told that she had suffered a severe traumatic brain injury that would be permanent.

Then a first-year psychology student who had just received gleaming results for her first semester, Teo found her life now irrevocably altered.

“I lost many things because of the accident,” Teo, now 31, told Salt&Light. Without missing a beat she added: “But God always made sure I lacked no good thing (Psalm 34:10).”

Still, her recovery was not an easy one.

With her body wrecked by the accident, it was impossible for her to even do simple tasks like walking, writing and dressing herself. Teo (right, in white) was excelling in her first semester of university before the accident happened.

She dropped out of university to focus on recuperating and spent a full year going in and out of the hospital for a variety of consultations and surgeries.

“I lost many things because of the accident.”

As a result of her brain injury, she also struggled to control her own body. For example, she would sometimes suddenly burst out laughing or crying for no reason.

These difficulties were compounded by the emotional pain of watching her friends moving on with “normal” life without her.

“Imagine at the age of 21, all my friends are back in school, going out, dating, feeling happy, and what am I doing? My days are busy with being in the hospital meeting my neurosurgeon, my orthopaedic, going for surgeries,” she said.

Choking up with emotion, Teo remembered asking God: “Why didn’t you just let me die?”

“I questioned God. I was angry with God … But I needed God.”

While others were singing praises during worship, she recalled hurling vulgarities at the God she had come to know in her days at Hwa Chong Institution.

“In my heart – I don’t even dare to say this – but I hated God. I questioned God. I was angry with God,” she confessed. “But I needed God.”

He was the only one that she felt could understand what she was going through. She knew that He was listening to her cries (Psalm 66:19). She believed He is a wonderful counsellor (Isaiah 9:6) who can fully empathise with her pain.

So while she railed at Him, she also knew this: “I’m his daughter. I need to hold His hand.”

And so she did, even as she went back to university and failed her first semester back – twice. She eventually dropped out of university and took up a diploma in child psychology instead.

“I’m his daughter. I need to hold His hand.”

Though she was resigned to the fact that her life would no longer look like that of her friends, watching them graduate with their degrees was particularly painful.

During that period she got off social media and spent her days blasting praise and worship songs in her room. “I knew that God knew how I felt and He could deal with my emotions,” she said.

She sought comfort in verses like Psalm 139:16 that showed how intimate her relationship with her heavenly Father is:

“Your eyes saw my unformed body; all the days ordained for me were written in your book before one of them came to be.”

Her faith in God’s nearness and kindness was not misplaced. Being a children’s ministry staff at CCMC was a dream come true for Teo, who had always wanted to work in a church.

While she worried about being able to find employment due to her cognitive impairment, God sent her a job opportunity to work as a children’s ministry staff at Covenant Community Methodist Church (CCMC) – a job she had always dreamed of as a young girl.

“God really took care of me. He never deprived me of anything.”

Though she was not earning as much as her contemporaries, “it was always sufficient”, she said.

Furthermore, her colleagues were understanding of her condition and took great care of her, she added.

“God knew that I needed to be in a very welcoming, loving and supportive community because I couldn’t process emotions or read people like a normal person, and I didn’t understand how to behave in situations,” she said.

Teo also found that God cared even about her tiniest desires, like travelling again and attending a fancy D&D like her friends in corporate jobs. Teo (third from right) yearned to travel again after her accident, and her prayers were answered after she went on a company retreat to Vietnam.

At CCMC, she got an opportunity to go to Vietnam for a company retreat. And in her next job at a social service organisation, she was given the chance to organise and attend a charity gala dinner.

Still excited when she recounts these little answered prayers, Teo said: “God really took care of me. He never deprived me of anything.”

The battle belongs to the Lord

However, she was still fighting a huge battle on the legal front, where she was embroiled in a lawsuit against the driver of the van to claim damages.

Her lawyer appeared to be less than sympathetic and was often impatient with her inability to grasp what was going on. Her parents, being unable to speak English, were unable to help her.

Her lawyer would scold and shout at her, she said. She had little choice but to bear with it as her family – her father is a hawker and her mother is a hairdresser – did not have many connections.

It was during this time that she cultivated the habit, one that she still has today, of kneeling by her bedroom window and taking it all to the Lord in prayer. “It was just me and God,” she said. “But I believe that God hears us.”

She exchanged her fears for worship and took courage in Bible stories that demonstrated the mightiness of God.

Her faith proved not to be in vain. One day a colleague heard Teo’s lawyer shouting at her over the phone and linked her up with another lawyer, whom Teo said was kind to her.

The lawsuit lasted an arduous six years, during which Teo often felt helpless. But she exchanged her fears for worship and took courage in Bible stories that demonstrated the mightiness of God.

In particular, she clung to 1 Samuel 17:47, which reminded her that the battle belongs to the Lord.

After much prayer, there was eventually a “good closure” to the lawsuit, she said. “God really took care of me.”

Teo’s experience spurred her and husband, who is an artificial intelligence (AI) scientist, to set up an online platform, CDike, to help connect people to lawyers. Teo also thanks God for bringing her husband into her life. They were married two years ago.

“How many people out there are like me? They may not necessarily qualify for pro bono services, nor have sufficient knowledge and connections to get a suitable lawyer,” she said.

Teo, who is running this platform full-time, finds out each clients’ need, budget and expectations, and links them up with the right lawyer. The matching is done virtually, which Teo said helps to protect clients’ privacy.

The service, which was formally launched in August, is free for clients, while lawyers who wish to join their community have to pay a small membership fee.

“I know how it feels like to feel hopeless in a situation. I know the pain of those who are not so educated and who don’t have many connections. I’m not a lawyer. I cannot fight their lawsuit for them. But I can try my best to help them.” Teo now also has a daughter, Ariel, who is about a year old.

While she once cursed God for letting the horrific accident happen to her, she now knows that God’s hand of care and love was always with her.

“I believe God already had everything planned out – even life after my accident, what I would do, what I can do with my life experiences. Because He knows just what we need before we say a word and He can do beyond what we can imagine!”

This is the first story in our Christmas series: God with Us. READ THE “GOD WITH US” STORIES BELOW and check back for more stories every day till Christmas!

Home for Christmas Eve? Gather your family for this intimate online carol service An accident so horrific, he lost half his brain, his memory and the life he thought he’d have