In the midst of COVID, “there exists a hope, unshakeable, everlasting and true”: What Beatrice Chao learnt from her father, who died battling SARS Beatrice (right) was only three when her father, 37-year-old Dr Alexandre Chao, died from SARS while fighting on the frontlines in 2003. All photos courtesy of Beatrice Chao.

Beatrice Chao was just three years old when her father, Dr Alexandre Chao, contracted and died from Severe Acute Respiratory Syndrome (SARS) in 2003 while fighting the virus on the frontlines in Singapore, leaving behind his wife and two young daughters.

In a Facebook post, Beatrice, now 20 and a student at Northwestern University in Chicago, reflects on his sacrifice and hope in light of the current COVID-19 situation.

The last 48 hours on Northwestern’s campus have been insane. Even saying this, I am ashamed to admit that the panic of this situation has only set in now that the pandemic has reached my own shores, despite having already reached my home country and the schools/states where some of my dearest friends have been weeks ago.

And yet, truly, the situation is chaos. I cannot write my final paper (ironically, about death and dying) in this coffee shop without my earbuds firmly in, because this virus is all anyone will talk about.

This descent into madness really magnifies both our brokenness in the ways we blame, accuse, doubt and complain, and the vastness of all we do not control even in the ways we scramble to protect and love each other the best we know how.

My father died during the SARS outbreak in 2003. He was a doctor, he cut his vacation in the US short to return to Singapore to treat SARS patients, where he then contracted it himself.

In many ways, what happened to my father is what most people fear now. It is the worst-case scenario. Whatever the coronavirus becomes, our greatest fear is that it will take away our lives, or the lives of the ones we love. This is the great uncertainty, the paralysing power of the virus. 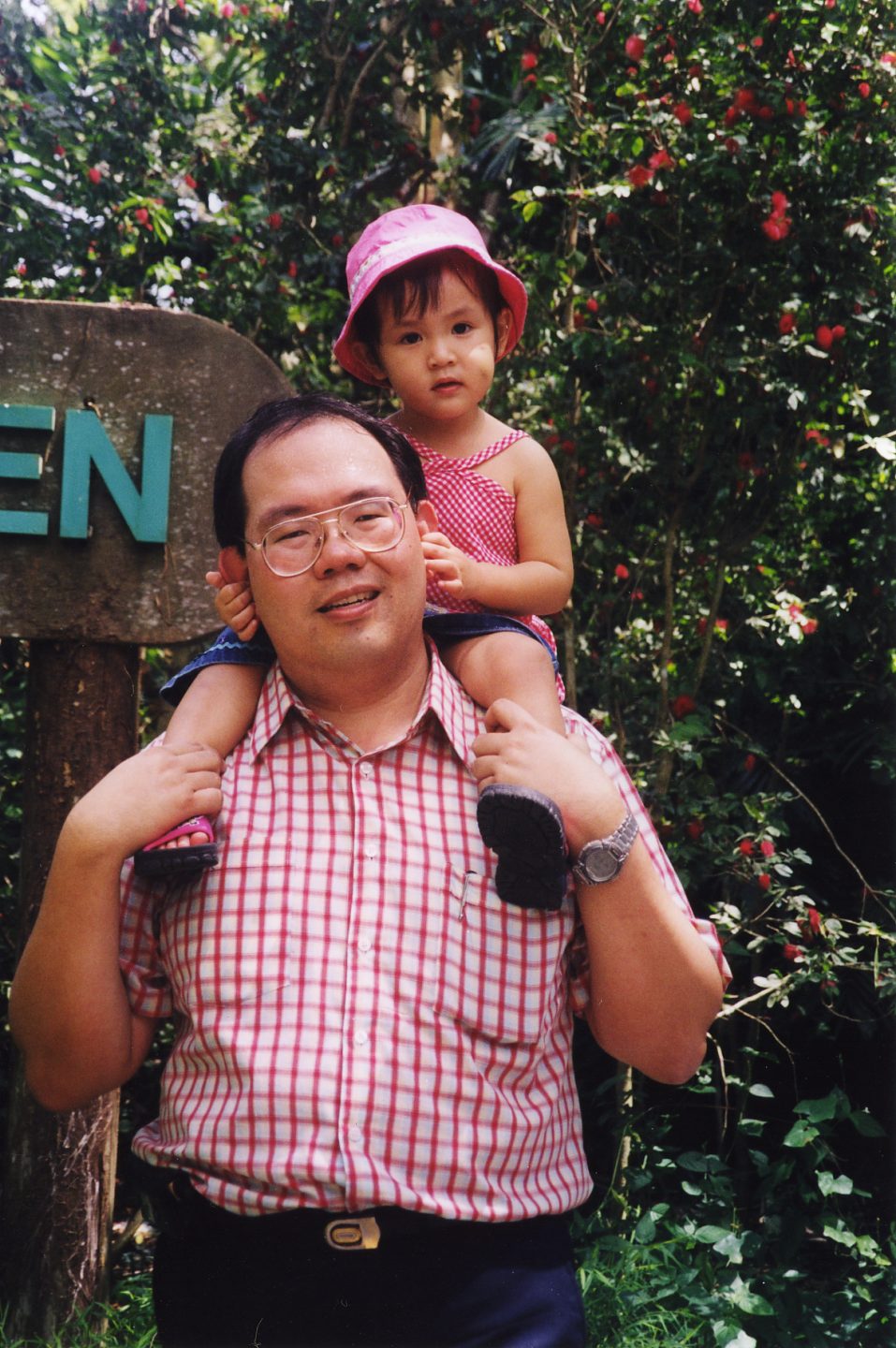 Years after Dr Chao died, Beatrice wondered what gave her father the courage to battle the virus at the cost of his own life. In his final letter penned in 2003, she found the answer.

Yesterday, I read one of the many eulogies that were written about him. The deep grief for my family is palpable in their words, and so was the inability to imagine how we would carry on.

Time must have felt like it stopped. Yet, 17 years later, here we are. It is not that my life was made worse or better, but it was indeed irrevocably changed.

To remember this in the world-halting panic that the US is experiencing is sobering. It makes it hard for me to say this is something that will simply blow over, and we’ll be able to carry on our lives as normal later.

To those who believe this fear I speak of is an economic, behavioural overreaction, that humanity will move on unfazed anyway, I say this – whether or not COVID-19 affects “only the elderly or those with pre-existing conditions”, or whether or not all this rearranging can be deemed “wholly unnecessary” because the virus is stamped out in five months, one thing is undeniable – our world will still have been rocked, turned on its fragile head by an invisible, tiny virus.

We are, truly, nothing but specks of dust in this vast universe, and these economic systems of prosperity, academic systems of worth, and governmental systems of control, can be so easily revealed for the flimsy, easily collapsible constructions they really are.

Secondly, I read the last New-Years’-update-letter my father sent out before he died. This moved me to tears, which was honestly probably not a health-safe move in a public Evanston coffeeshop.

In the days, weeks and years after my father’s death, people spoke primarily of his courage, of his “unwavering decision to return as soon as he heard the news about the outbreak in Singapore”. As my mom said: “He advised me against going to Toronto for a research award and presentation at that time, but never did he once doubt his own decision to return to the frontline of danger.”

What gave my father this courage?

“I wonder what motivated my father, a fleck of dust unafraid in the face of the world’s revolving uncertainty.”

As the world despairs about physical separation and isolation over the next few months, it’s hard to think about ways we can draw closer to each other and support each other in love rather than fear (I, for one, find it difficult to overcome my own internal cycle of panic, blame and desire for control).

My father did so anyway, at the cost of his own life. And I wonder what motivated him, a fleck of dust unafraid in the face of the world’s revolving uncertainty.

This is the final paragraph of my father’s final letter:

“All of us will enter the new year facing economic and global political uncertainty. As we stand at the threshold of year 2003, let us be reminded that a new page in the history of mankind began two thousand and three years ago, when the birth of a tiny baby brought new hope, peace and a new relationship between God and man.

“For unto us was indeed given a ‘Wonderful Counsellor, Mighty God, Everlasting Father, and Prince of Peace’. As we all enter into this new year together, our wish and prayer for you is to experience and enjoy this precious gift and divine blessing which will see us through the most challenging times of our lives.”

Of course, he didn’t know at the time that 2003 was going to be his last year on this earth. Yet this is the hope he rejoiced in as SARS came into the world, as he rushed back to the frontlines, and as he went smiling into surgery, for a final time.

Secondly, it encourages me that this is the hope with which I am empowered and enabled to love others, to care for my fellow specks in the universe with joy and abandon.

“The world has been irrevocably changed, not because of COVID-19, but because of the man Jesus Christ.”

Truly, the world has been irrevocably changed, not because of COVID-19, but because of the man Jesus Christ who lived and breathed on this earth 2000 years ago, and brought with Him a message that has forever altered my position as a speck of dust in this universe. And for this, we have no reason to fear, and all the more reason to hope. For this, I have no fear. This is the hope I cling on to, and the hope with which I will endeavour to love the people around me as hard as I can, to show as much kindness as I can, for there is much reason to rejoice even in the face of overwhelming fear.

How, you may ask, was this tale of a man named Jesus dying on a cross so powerful as to offer such courage in the face of death? I spent almost my whole life wondering, and was sure that it was all just a delusion, until I investigated the Bible myself. And it’s the hope that carries me now, too.

To my brothers and sister in Christ, I leave you with Paul’s words in Hebrews 10:23-25.

“Let us hold unswervingly to the hope we profess, for he who promised is faithful. And let us consider how we may spur one another on toward love and good deeds, not giving up meeting together, as some are in the habit of doing, but encouraging one another – and all the more as you see the Day approaching.”

Cling to your hope in Jesus during this time, for it will be sufficient, I promise. It was for my father. When you feel hopeless, nurture this hope, and not only will it grow for you, it will grow so you can bring that same hope to others.

“Cling to your hope in Jesus during this time, for it will be sufficient, I promise. It was for my father.”

While we’re not going to be able to meet physically (nor should we, be considerate), there’s still lots we can do to love each other, and to love those around us. Do so with your whole heart, for He has first loved you (so, so much). Love each other, be patient, and understanding and kind.

However you find your hope through this season, cling tightly to each other, to the people in your life that you love and those you have yet to love.

For it is Jesus’ final victory over sin, brokenness and death on which I rest my hope. Nothing less.

This was first posted on Beatrice Chao’s Facebook page and is republished with permission.

“Fret not, we are still at peace”: Son of Kuching pastor who is Malaysia’s first COVID-19 death

“We were meant to be here”: SARS doctor who arrived in Singapore just before the outbreak Beatrice Chao is the daughter of Dr Alexandre Chao, a 37-year-old Singapore General Hospital vascular surgeon who died from SARS while fighting the virus in 2003. Now 20, she is currently a student at Northwestern University in Chicago.

"Fret not, we are still at peace": Son of Kuching pastor who is Malaysia's first COVID-19 death

Overseas students home-bound: Thank God for the many ETAs expected this week