Engaging with residents of nursing homes and seeing how therapists and nurses interact with them has given fomer banker Junie Foo (left) a new respect for all in healthcare and social service. The Executive Group Director of MWS is pictured here with a resident of MWS Bethany Nursing Home in Choa Chua Kang. Photos courtesy of Junie Foo and MWS.

One interviewer was on his mobile phone, saying: “You all go ahead, I need to send this out.”

The other members of the Methodist Welfare Services (MWS) Board of Directors peppered her with questions, such as: “Where do you see MWS in five years?” “How do you manage conflict?”

“I am from the banking industry. I manage conflict everyday,” Foo replied coolly.

She had wanted to be a diplomat when she graduated with a political science degree, but “the banks got to me first and I accidentally stayed for 28 years”.

The chairman of MWS had recommended her for the role of Group Executive Director.

Foo was uncomfortable as she thought they were looking for someone with experience in the social service sector.  She had none.

But her testimony captured the Board’s attention.

“In 2015, I was at the prime of my career. I broke the Japanese glass ceiling and had all the razzmatazz of being the first non-Japanese and the first female in management of the corporate banking division of the bank where I worked.

“I had a boss, a sponsor, who believed in my capabilities.

“But 2017 was tougher than the previous years.

“I’m staring at death again, so soon after your mother’s death.”

“I was on a business trip when my dad called. He told me that my Da Tang Ge (大堂哥), the eldest of my cousins, who was unconscious, had woken up. He was asking, ‘Where is Junie?’ He had been suffering from cancer for 14 years.

“I flew back to visit him. I hadn’t seen him for a long time. I was really shocked to see a skeletal figure dying in front of me.

“I phoned my husband and said, ‘I’m staring at death again, so soon after your mother’s death.’

“My mother-in-law had passed away 10 days earlier from aggressive cancer.

“God prompted my husband to tell me, ‘Read the Apostle’s Creed to your cousin.’

“I felt God telling me, ‘I’m going to do something with your life.'”

“I held my cousin’s hand and read it out loud. Then I said, ‘Go in peace. I’ll see you in heaven.’

“You know what? His heart rate monitor just flatlined and went deeeeeeeet … it was so surreal.” (“I’m getting goose bumps telling you this,” she tells Salt&Light.)

“I remembered that I was probably 10 years old when my cousin brought me to a Christian rally. We were the first Christians in our traditional Chinese homes.

“My cousin had been struggling with his faith in the last six months. He was angry with God for not healing him.

“He brought me to Christ. And God used me to remind him that he had received his salvation and was going back to God. I also felt God telling me, ‘I’m going to do something with your life.’ “

“Hit me with your best shot”

“The next few months were traumatic. I wouldn’t wish it on anyone.

“I had to retrench staff. It was heart-wrenching. I had to let go of very good people. Others left and weren’t replaced. Our team was working on half strength from 7.30am till 10pm almost daily. It was very unhealthy and unsustainable.

“I would often go on overnight business trips, and go to work straight after arriving back in Singapore. I barely had time to see my husband and my parents.

“One day He sent a messenger, a quiet staff member, who said to me: ‘The battle is not yours.'”

“The environment in the office became totally different when my boss who supported and believed in me was rotated to another assignment.

“In July, my parents had a freak accident. The brakes on the buggy my dad was driving failed. My mother sustained a hairline fracture.

“In August, my mum had a heart attack.

“Every morning, I would wake up, steel myself and say to the day, ‘Hit me with your best shot.’

“Even though we were working so hard, the big chunky deals we needed did not come to fruition or dissipated into thin air.

“All this while, I was seeking God, asking for his guidance.

“After that I had cervical spondylosis which affected my neck. Then I had a pain in the abdomen. It turned out to be a 5cm growth in my womb. My gynae said we should take it out as it could be malignant.

“But first I wanted to go on a mission trip to Nepal. I had booked it the previous year.

“How can you do the better plans I have for you if you don’t let go?”

“All this while, I was asking God: ‘If you are closing doors for me, will you open new doors for me?’

“In October, as I was driving home, God spoke to me: ‘How can you follow the better plans I have for you if you don’t let go?

“Guess what? The worship music I was listening to was the hymn, I Surrender All.

“The next day, I ran into an ex-colleague, a strong Christian.When I asked what she was doing near my office at 7.30am, she said, ‘Don’t know really. I thought I would check out your part of the woods.’

“I told her I was really stressed at work, but was looking forward to going on the mission trip.

“My friend said, ‘It’s so good to listen to God’s prompting to go on a mission trip to serve. Sometimes you just need to let go and surrender to God.’

“I burst into tears.”

“When I told my care group about hearing from God, they asked me to read Psalm 25, a lesson on decision making that I had missed as I had been travelling.

“If you go back to banking, it’s only vanity. If you work for MWS, you’ll be working for God and I will support you.”

King David was surrounded by his enemies, pleading to God: ‘Show me Your path, guide me. Let not my enemies triumph over me. I am lonely and afflicted.’ And that is how I felt.

“I read this chapter and meditated on it every day before the mission trip.

“When we were in Nepal, the missionary flipped the pages of his Bible and said: ‘Today’s reading is Psalm 25.’

“Yeah, another confirmation, right? I turned to my husband and we both [expression of surprise].

“I told my husband, ‘Hey, I think God wants me to leave and I am going to leave like that … without another job. Even though parents, the marketplace, the world, always tells you that you need another job in your pocket before your resign. Foo is well-known for championing the role of women in leadership positions and on boards. But at home, she tries to be “a very submissive Christian wife” to her supportive husband, Tan Wee Hiong, a Forex dealer.

“That same week when I was negotiating to leave the company, I got a call from a headhunter, about another bank who wanted to hire me. It was a billion dollar business I could deliver on, with a large pay packet if I did well.

“God is so amazing. I felt that he wanted to give me a choice.

“But I knew inside me that the fire for banking had died. I did not just want to hit a target. I wanted to do something that would impact people for good.”

“The same night that I tendered my resignation, I was at a dinner that had been planned some time ago. A pastor there said, ‘MWS is looking for a group executive director. You want or not?’

“My immediate response was, ‘Noooooooooo … !’

“I had only just tendered my resignation. I was going for surgery. I told the pastor, ‘I think God wants me to rest.’

“For three consecutive days, I read Psalm 25. It reminded me to be humble, fear the Lord and obey Him.”

“This was in end November. The subject was revisited in the first quarter of the next year.

“Meanwhile, offers were coming in from other banks, as well as an opportunity to work with a friend to start a trust fund.

“My husband said, ‘If you go back to banking, it’s only vanity. If you work for MWS, you’ll be working for God and I will support you. We knew that I would be taking home only a fraction of what I could be earning.

“I was very touched. I married a wise man!

“So I only prayed for MWS.

“I also mediated on Matthew 6:33: ‘But seek first His Kingdom and His righteousness, and all these things will be given to you.'”

“Anointed. That is a big word for me,” Foo said.

The man continued. “Let me affirm you. I read Psalm 25 this morning. With my wife.'”

The atmosphere in the interview changed. Foo’s painting, “City on a Hill”, raised $15,200 at the inaugural MWS Charity Ball in 2019. Thanks to generous supporters, the event hit their target of $700,000 which will go towards helping MWS meet the needs of the poor and vulnerable.

Foo finds that she’s “grown more dependent on God” since joining MWS, including leaning on Him to equip her for Christian missions, and decisions she makes for the organisation.

To understand the sector, she enrolled herself in courses and read voraciously. She visited centres, nursing homes and homes of families with various challenges exacerbated by financial woes.

“We are brought up to think that because you are poor, you didn’t study hard or work hard,” she said. “But some people are placed in a disadvantaged situation because of things that have happened to them. Or they haven’t been given a break in life. Sometimes you just need someone to open the door for them.”

While the world may see giving up high-paying banking jobs for one in the social service sector a sacrifice, Foo sees it as a privilege.

Foo’s experience in social services has been on the board of Star Shelter, a refuge for women who are victims of family violence. It is part of the Singapore Council of Women’s Organisations (SCWO) where she was its first vice-president.

While the world may see giving up high-paying banking jobs for one in the social service sector as a sacrifice, Foo sees it as “a privilege”. She describes her 1.5 years as Group Executive Director of the multi-service charitable organisation that serves the community as “beyond amazing”.

However, she is “a bit sad” about some friendships that have drifted apart. Partly because they no longer move in the same social circles.

Foo has been too busy with governance committee meetings in the evenings to attend functions or parties. “Some friends may not consider me fun or cool any more. They may be finding me too religious. Or they may feel uncomfortable because of my conversation topics. I’m always talking about poverty.

“In Matthew 4:19-20, Jesus had said: ‘Come, follow me, and I will send you out to fish for people.’ At once they left their nets and followed him.”

“They left their nets. I guess I needed to leave something behind.”

"This crisis will bring us closer together as fellow Singaporeans united in one country": Bishop Kee in reply to Muis 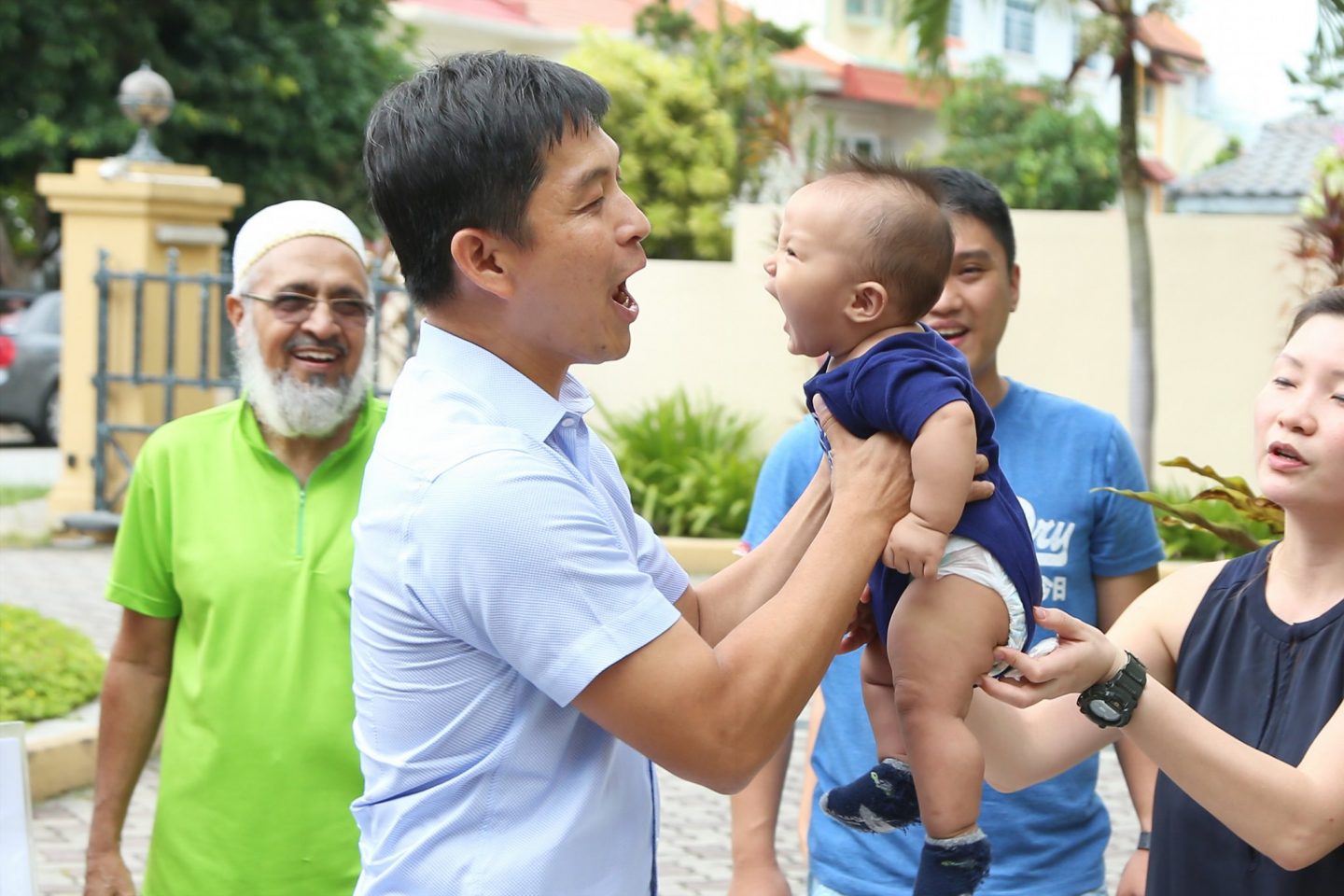