Break the Cycle SG co-founder Andrew Ong (left) believes that cycling is an effective way to help ex-offenders break the cycle of recidivism by introducing new friends and healthy habits. All photos from Break the Cycle SG's Facebook page.

A former drug addict of 22 years, Jeremy Tan, 51, harboured feelings of inadequacy and shame about his past, even though he had turned his life around and been sober for 10 years.

That all changed last year, however, thanks to the help of something rather unusual – a cycling group.

After experiencing how warm its members were toward him, Tan, who is reserved by nature, found himself opening up to the group, which includes people who are chief executive officers and directors, about his past. Jeremy Tan (centre, in yellow) said that he enjoys the adrenaline and rush of endorphins he receives when he cycles.

The staff member of halfway house The Hiding Place was pleasantly surprised when they expressed respect for how far he has come. “They also encouraged me to continue the good work,” recalled Tan, sharing that their affirmation boosted his self-confidence.

“Now, I feel proud serving at The Hiding Place. In the group, it doesn’t matter how much you earn or what your position is. They’re all very caring and accepting, so it doesn’t bother me anymore,” he said.

Tan is part of a new ground-up initiative called Break the Cycle SG, which aims to use the sport of cycling to help ex-convicts – as its name aptly suggests – break the cycle of recidivism (reoffending).

Started last September, the ground-up initiative currently has about 30 members, of which 25% are ex-convicts.

Having a positive and affirming community is an important bulwark against reoffending, said Break the Cycle SG co-founder Andrew Ong, 43, who was named one of Singapore’s Silent Heroes last year for his role in the initiative.

“One of the reasons why people reoffend is because they don’t have a new set of friends. They may try to break away from their old friends but they don’t make new ones. And if they stay in their cocoon, they will eventually fail because they are alone,” he said. Ong (second from right) hopes that providing ex-offenders with a positive and affirming community will help them to stay on the straight and narrow.

According to the Singapore Prison Service, recidivism rates in Singapore, which show the proportion of ex-convicts returning to prison within two years of release, hover at about 25% on average.

However, this percentage rises as time goes on. According to an article by The Straits Times, about 40% of offenders released in 2013 returned to prison within five years.

Most of those who reoffend are drug addicts, he noted, adding that drug abuse is a “serious and destructive” issue as it affects, not just the individual, but families and generations too.

“One of the reasons why people reoffend is because they don’t have a new set of friends.”

This likelihood rises to five times if parents had committed drug offences, the study revealed. The likelihood of a child offending also increases if the parent is a repeat offender.

“This is why we need to break the cycle of recidivism,” said Ong, who hopes to reach out to recovering drug addicts who are getting ready to be released from halfway houses and reintegrated into society.

“We play that small part of being their new set of friends so when they come out, they have us to fall back on and will keep in touch with us because we cycle every week. It’s a friendship thing.”

The idea to use cycling as a way to reach out to ex-offenders had come about after Ong began cycling more regularly in 2019, following a health check that revealed his cholesterol levels were “off the charts”.

After six months, a follow-up health check showed that his cholesterol levels had dropped by 20%. And not only that, but his weight had fallen from more than 80kg to 72kg.

After a year of keeping up these healthier habits, his cholesterol levels dropped by 50% and his weight was down to 66kg. Ong saw a huge change in his cholesterol levels and weight after just six months of cycling twice a week and eating more healthily. Photo from Andrew Ong’s Instagram page.

“That really energised me,” he said, adding that he also began feeling healthier mentally. “I became sharper and more focused because I was setting distance goals, speed goals. And every time I achieved a goal, I became more motivated.”

“If you want to break a bad habit, you need to replace it with a healthy habit.”

He also got to know two friends, both of whom are avid cyclists, who coached him on breathing techniques and training regimes, and helped to customise his bicycle for better performance.

One day he had an epiphany: “All these things are quite suited to helping an ex-offender,” said Ong, who has been serving ex-offenders in various non-profit organisations for years.

“If you want to break a bad habit, you need to replace it with a healthy habit,” he said, adding that he saw how cycling is a great mentoring tool.

“When you cycle, you cannot improve unless you have a third party to observe your pedal strokes and point out your mistakes. That’s what mentoring and discipleship is about,” he said.

Speaking truths on the road

”That’s the beautiful part. You can use cycling as a way to speak into somebody’s life.”

“It’s very difficult to tell someone, ‘You’re very inconsiderate.’ But with cycling, you can say, ‘When you did that just now, you could have injured somebody or caused an accident. Perhaps you can consider others behind you and don’t be so reckless.’

“They’re better able to stomach it. That’s the beautiful part. You can use cycling as a way to speak into somebody’s life.”

Since cycling is not the most affordable sport – a roadworthy bike costs at least $1,000 – one of Ong’s fellow co-founders, Carter Ng, who is handy with bikes, helps to source for parts and customises bicycles according to their needs.

This can help to lower the price by up to 50%, said Ong, adding that the cyclist will have to save up this amount as he does not want to give them handouts. “At the end of the day, we want them to take ownership and have more dignity.”

While Break the Cycle SG is a secular initiative, Ong, who himself is an ex-convict and drug abuser who has been behind bars twice, said his heart for the work stems from his personal faith story.

As a teenager, Ong had gotten caught up in gangs and dropped out of secondary school. When he was just 18, he was jailed for nine months for rioting.

It was in prison that he encountered Jesus after a reading a New Testament Bible that he found in his cell.

However, after he was released, he went back to his old lifestyle and ways, including abusing drugs. He was also jailed two weeks in the Detention Barracks for going AWOL after quarrelling with a superior.

“I’m convinced that it’s the power of the Gospel that saves, because of how it has changed my life.”

“It was like a wake-up call. I was in a depressive state looking back at my growing up years and wondering how I had become this person that I disdain,” he said.

It was then that he was “ambushed” by the grace of God, he said. “I realised that God had been at every juncture of my life despite me spurning his advances to return to Him.”

That night, he surrendered his life to God. It was a turning point in his life.

His cravings for drugs disappeared completely after that, he said. He broke off old relationships, quit his job in the night scene and started going to church more regularly.

He also spent a year at a church seminary and later went back to school, working his way up to obtain a university degree in Communications Management – all this, so he could be better equipped to serve God.

Now married and the head of corporate partnerships and marketing at Empact, a social enterprise that helps to build the capacity of social organisations, Ong draws inspiration for his work from Paul’s words in Acts 20:24:

“But I do not account my life of any value nor as precious to myself, if only I may finish my course and the ministry that I received from the Lord Jesus, to testify to the gospel of the grace of God.”

“That has been my life mission and overarching purpose. I’m convinced that it’s the power of the Gospel that saves, because of how it has changed my life.”

Fuelled by the love that he has received, Ong hopes to be a channel of God’s love and blessing to those who go on rides with him.

On these rides, held three times a week, they meet at Seletar in groups of eight, according to the prevailing safe management measures, to embark on an hour-and-a-half ride. They wait for one another and encourage each other when fatigue sets in.

After pressing on past the finish line together, they stay behind for about half an hour to hydrate and chit-chat about life. Sometimes, one or two of them will open up about an issue they have been struggling with, such as an illness or job difficulty.

Ong finds these moments valuable and takes the opportunity to minister to them in simple ways. “If they’re sick, I’ll offer to pray for them. If they’re retrenched, I’ll be on the lookout for job openings,” he said. “This is the Gospel in action.” After each cycle, members of Break the Cycle SG chit-chat over food and drinks, and share their lives with one another.

A strong believer in the power of community, he is heartened to see different individuals and organisations coming forward to support the initiative.

No form of support or solidarity is too small, he said. “Simply riding beside an ex-offender is encouraging him by telling him that you’re not scared of him or want to shun him.”

His dream is to one day put together a team of cyclists who are ex-offenders to compete in a race. It will give them something to work towards, he said.

But more than that, it is to prove a point and send a resounding message: “Breaking the cycle is not easy. But together, it’s possible.”

Want to find out more about Break the Cycle SG?

Architects of Life: Social enterprise inspires ex-offenders to go from stereotype to archetype 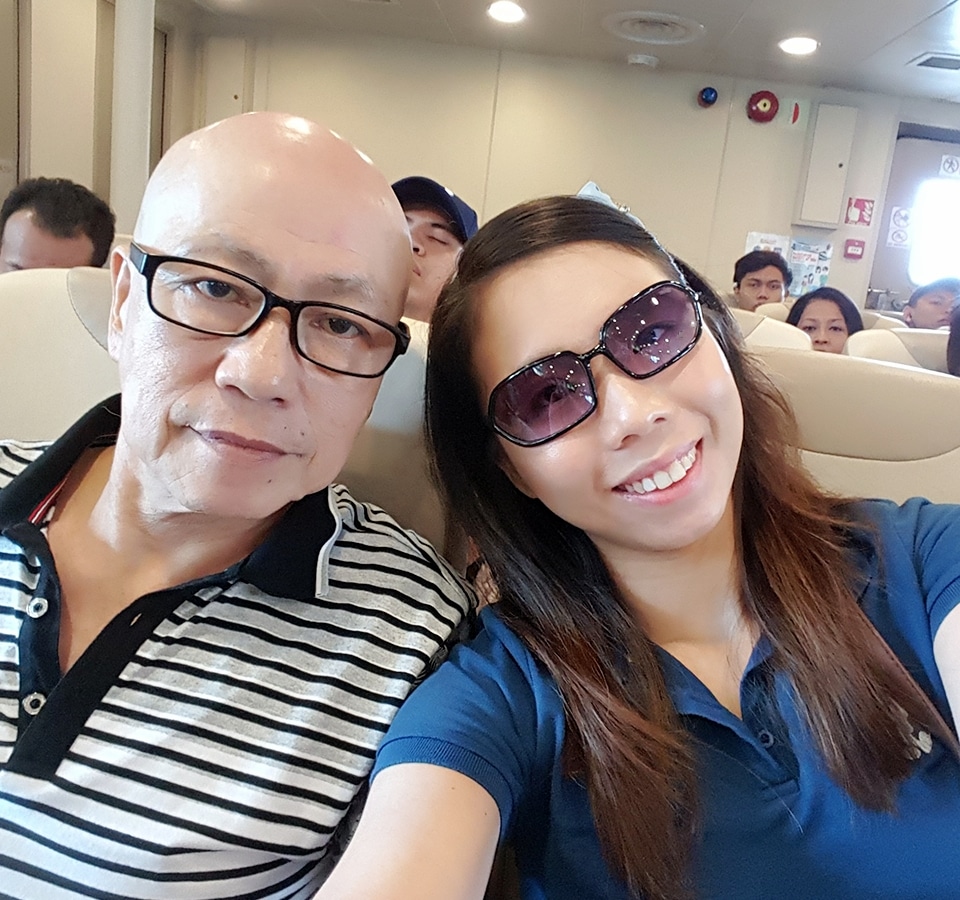