How your career success fits into God’s Kingdom Clarence Foo (left) receiving his award for being one of the company's top achievers.

Foo, 40, who joined the industry in mid-2013, has managed to snag an award yearly. In 2016, he even broke into the top 10 realtor rankings within his company.

“Really?” Her eyes were wide with incredulity.

“Really. But you don’t kee toh to any god. You pray to the wrong one also boh pakay one (a colloquial term to mean useless).”

He offered some practical advice. But, every now and then, she still goes up to Foo and asks: “Eh, how come you always do well?”

Recognition at work, when viewed correctly, is a “very good door opener to conversations”, says Foo, who makes it a point to tell colleagues who ask that God is the secret to any success he’s had.

“In order to be recognised, first there has to be excellence to a certain extent. The whole point is to bring you to a place where you can influence,” he explained, referencing Proverbs 22:29.

But his road to success was fraught with much testing.

Foo recalled a time during his first year as a property agent. He and his colleague were working on a case and had agreed that whoever closed the deal would get to keep the commission. He had been working hard on this case, showing the property to over 40 potential buyers.

One night, God asked him: “Can you pray that your colleague gets this case?”

He wrestled with God; it was not an easy prayer to say. He needed the money as he was the sole breadwinner at home and his daughter was barely a year old then. But he obeyed.

Eventually both of them received separate offers on the same day. His colleague, who knew the situation that Foo was in, urged him to present his offer first to the seller. But deep down, he knew that his offer was inferior compared to his colleague’s as it was not what the seller wanted.

After trying and failing, Foo urged his colleague to put in his offer that very night.

“The moment I did that, I knew the case was gone and that he would get it. I went to my car and cried in there for 15 minutes. I cried, not because he got it, but because I was mentally and emotionally drained. He closed the case,” he recalled.

“I had to learn to rejoice when it wasn’t my success.”

A few days later, God reminded him about the prayer he had made: “I did according to what you prayed, so you should not be sad about it.”

When the deal was completed some months later, his colleague said he would split some of the commission, despite their earlier agreement. “Nobody does that. It’s not logical,” said Foo.

“I felt a breakthrough come after that because I had to learn to rejoice when it wasn’t my success. It’s difficult to rejoice when you’re not the one getting the favour,” he explained. “That was crucial.”

But God was far from done with him.

Being in this line, Foo meets people from all walks of life – most are easy to work with, and some, less than pleasant. He has been taken advantage of, endured verbal abuse and even faced false accusations from a handful of clients.

He recounted a time he had to meet a set of difficult clients for the last time. A few days before the meeting, God challenged him: “Give them something.”

“I really struggled because I thought to myself, ’God, they’re really demanding people. Why do I need to give anything? And anyway, I have not done anything wrong!’” he said.

It was not the gift that God was looking at, it was his heart.

Again, he argued with God. And again, he made the decision to heed God’s word – he picked up a gift for the clients and gave it to them.

You may think that a gift may have repaired the relationship but Foo lets on that the clients took the gift and left without a word of thanks.

It was not the gift that God was looking at, it was his heart.

“I’ve given gifts a few more times since then at God’s promptings. I’m quite glad that it’s not often because, if it were, I would be broke as I’d be losing money!” he said good naturedly. But he was also quick to add that the gifting was not a means of resolving offences, rather they were acts that God had specifically spoken to him about.

These two counter-cultural lessons – rejoicing with others at their success and unmerited gifting – are what he shares with his colleagues during training sessions.

Often to their bewilderment.

Yet, this is how he shares his testimonies (Revelation 12:11) and imparts Kingdom values in his sphere of influence. The very same lessons have also helped shaped the culture within his team, where they look out for the interest of others and discourage offences from lingering. 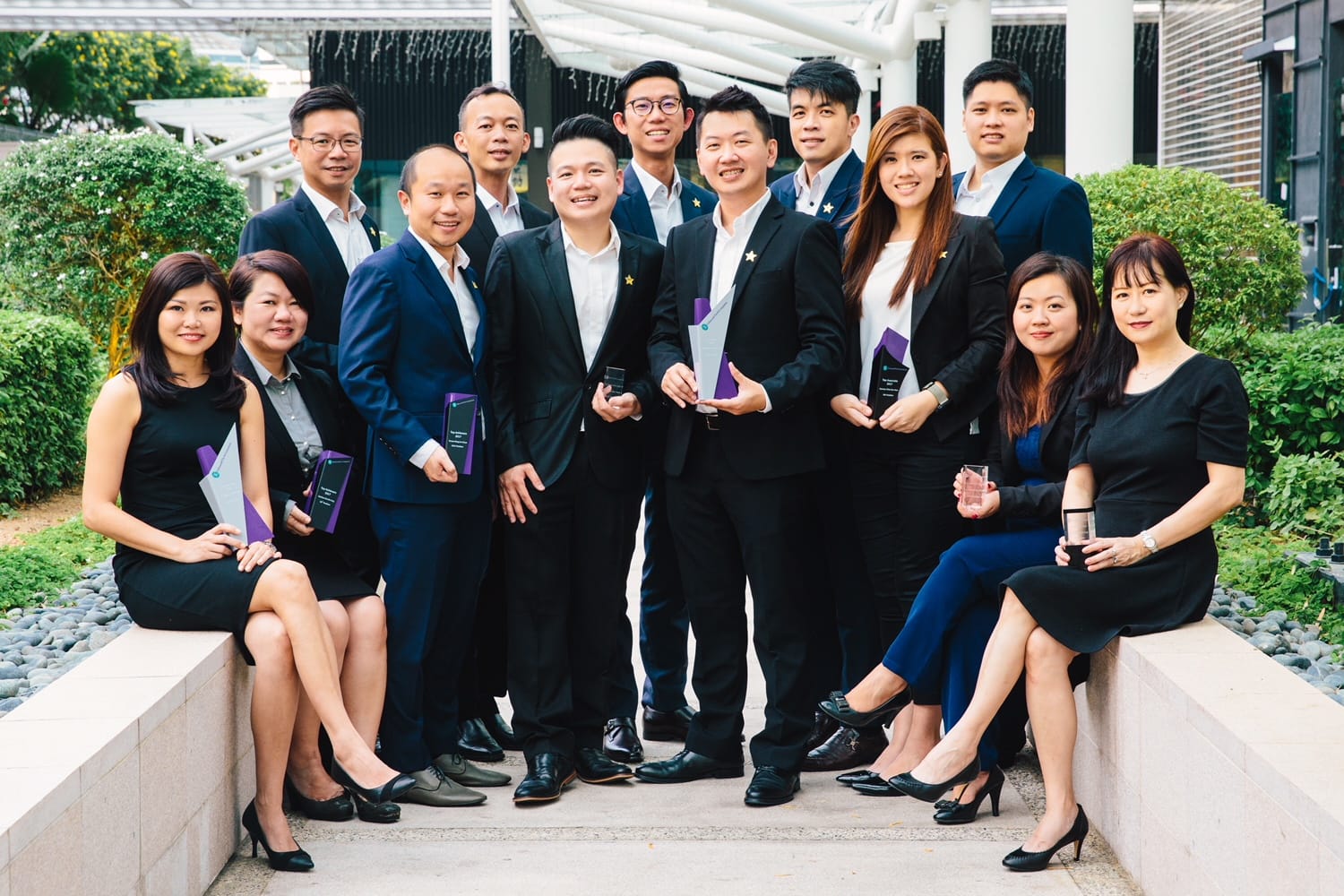 Clarence (last row, middle), together with his colleagues. At a company-wide talk, he urged his colleagues to rethink their definition of success. He quoted Cullen Hightower, who said: “A good measure of your worth includes the benefits others have gained from your success.”

This has helped his team to do well, prompting frequent queries on what the team is doing differently – opening doors to share the Gospel and testify about God’s goodness.

As for Foo, he measures success not by monetary gain or professional recognition, but rather by whether he has made a difference in the lives of his clients.

“As a Christian in this industry, when I’ve helped my clients invest wisely and used their finances in a prudent manner, that to me is what I consider success.

“It could be a young couple getting their home for the first time, it could be someone who is buying property for investment, but in all these cases, it has to do with how they plan their resources.

“If I can guide them and advise them in the best possible way to grow their wealth, if I can help someone achieve some form of financial stability, then I think I’ve made a difference for them.”

Ask Salt&Light : How do I share the Gospel gently?