Proverbs 31 has "that beautiful but difficult list of values and achievements", writes Dr Tan Lai Yong. Photo by Joanna Nix-Walkup on Unsplash.

As Boy Scouts in the 1970s, one of the badges we aimed to collect was the “Tree Climber”: Climb up a tall tree at the edge of the school field, touch the lowest branch and earn the badge.

“Tree Climber” was the last badge that I needed as part of the District Commissioner Award process.

I tried hard to scale up the tree trunk but I just could not do it.

I tried and tried but I could not climb that tree.

I practised during recess breaks. I tried before school when the golden sun rays tingled among the leaves.

I tried and tried but I could not climb that tree.

My only reward was the scratches on the inside of my thighs, sweaty palms that could not grip, and the big time drop of my wounded self-esteem.

The book of Proverbs has some thorny statements about women:

“It is better to live in a corner of the housetop
than in a house shared with a quarrelsome wife.” (Proverbs 21:9)

“A continual dripping on a rainy day
and a quarrelsome wife are alike;
to restrain her is to restrain the wind
or to grasp oil in one’s right hand.” (Proverbs 27:15,16)

To make it tougher on the ladies, the book of Proverbs ends with the passage of “The Noble Woman” – and has that beautiful but difficult list of values and achievements.

If we are not careful, we ask our women folk to take on Proverbs 31 as a benchmark and lay the expectation – or worse, the requirement – to rise up to become that Noble Woman.

I suspect that many will try and perhaps many end up with a fair amount of scratches and maybe even deep wounds.

The Gospel is totally about God’s grace. The book of Proverbs actually reverberates with grace.

It was my friends who made the branch that was beyond my ability reachable.

But we have a tendency to miss the grace as we routinely function within grades and graphs.

We have a tendency to miss the grace as we routinely function within grades and graphs.

At our unloving moments, Christian men tell our womenfolk about the quarrelsome wife, forgetting that it often takes two to make and sustain a quarrel.

On one Saturday morning, just before the closing date for submissions to the Scouts Award, my fingers stretched out and touched that lowest branch. Just barely.

I don’t remember much of that badge. But I remember the friends who coached and encouraged me.

Boys who could breeze up that tree chose to show me how to climb in slow motion. On that day of the test, one allowed me to step on his hand and another on his shoulder.

They made the branch that was beyond me reachable.

Proverbs 31 was not written to women. It was written to a man! “The words of King Lemuel. An oracle that his mother taught him.” (Proverbs 31:1)

The man of wisdom has to act wisely to set the foundations for the woman of noble character to arise.

The words are of an oracle. The wise man who must speak up for the needy and defend the downtrodden (Proverbs 31:2-6) is also mandated by the same oracle to empower the woman to be that woman who rises in the morning to provide for the household, who plants the vineyard, who receives profit for trade and who feeds the poor.

The word “oracle” used here is also sometimes translated as “burden” – with the idea of uplifting and tribute-bearing (see Numbers 4).

The oracle guides Lemuel that the man of wisdom has to act; and to act wisely is to set the foundations for the woman of noble character to arise.

This is the Gospel of Grace – that the man empowers the woman to become the person that the Lord designed her to be.

Solomon spectacularly failed in empowering women when he went on the path of having 300 concubines and 700 hundred wives. He wrote about the woman of wisdom (Proverbs 9:1-18) but himself failed to be nurtured under her roof and did not benefit from eating at Wisdom’s wise table.

His life was spent on splendour but he missed out on God’s grace. He made himself to be the lord over his women.

Solomon’s life was spent on splendour but he missed out on God’s grace.

Proverbs 31, the concluding passage, tells us that wisdom functions under the umbrella of serving one another.

By God’s grace, the oracle teaches the man that his role is to uplift the woman so that she becomes the woman of noble character. This is to be his concluding and, perhaps, highest tribute.

If the woman is tasked to achieve the list in Proverbs 31, it will be the pathway of the gospel of works – a false gospel that is not found in our Bible, neither in the Old or New Testament.

When this side of heaven fades, the Church will be presented spotless as the Bride of Christ. This Bride, the noble Church, is by grace and grace alone.

We, the Church, have messed up in history and have been embroiled in scandals big and small. Legalism is common.

The Bible tells us what the church ought to be. Many will rightly live diligently towards godliness, but we know that we get there by grace and grace alone – the grace of the Son of God who hung on that tree and died for us. “So, I gained the Tree Climbing badge … But it wasn’t about what I did that day.” Photo by Mael Balland on Unsplash.

So, I gained the Tree Climbing badge – with the additional few cuts and bruises.

But it wasn’t about what I did that day. It was about what my fellow Scouts did for me (they did not get any badges for supporting me).

With Father’s Day around the corner, it is sobering to learn that Proverbs 31 was written to a man.

The verses do tell us about the deeds and dedication of the Noble Woman. But this is not a to-do list for the women. This oracle – as all parts of inspired and revealed Scriptures are – is a clear reminder to us that it is only by God’s grace.

God grace is in full action when my life goals, my mistakes and achievements are all taken up and shaped by the crucified Christ. I am part of the Bride that will be received by the Lord.

In the meantime, let us be channels of God’s grace, at times offering a hand or a shoulder, but never a legalistic benchmark, that someone else can be clothed in strength and dignity, to speak with wisdom and be blessed. 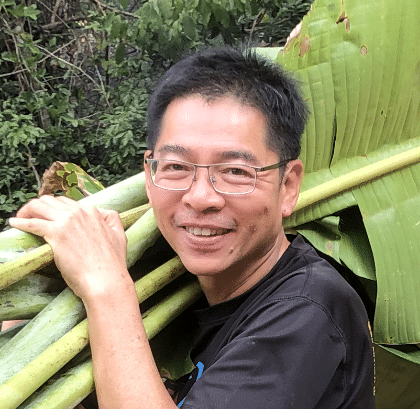 Dr Tan Lai Yong has been with Bethesda Frankel Estate Church from way back as a teenage Scout in the 1970s. He teaches inter-disciplinary modules at NUS, with classes such as “Hidden Communities in Singapore” and “Leadership @The Fringes”. When not on teaching duties, he and his wife are involved in rural community projects in small islands in Indonesia.

“My father showed me God is real”: Repeat offender's transforming faith and love moved his daughter