“It had to be the Lord”: Former national swimmer Joscelin Yeo on her life’s dramatic turnaround After a devastating miscarriage, Joscelin "held on to God's Word and His promise to me that children are my inheritance (Psalms 127:3) ... An inheritance is something you don't earn. It’s something that you're given." She now has four children. Photos from https://www.facebook.com/JoscelinYeoWL/

Joscelin Yeo will always be remembered as one of Singapore’s golden girls.

In the 1990s, she flew the Singapore flag high at regional swimming meets. Her name resounded from television sets across the island and was splashed across news headlines as she made waves in the pool.

Her record haul of 40 gold medals in the Southeast Asian Games remains unchallenged. Joscelin Yeo’s international swimming career began when she was 11 years old at the 1990 Asian Games. She retired in 2007 after a 17-year competitive swimming career.

But for Yeo, her competition days are mostly water under the bridge now, “Achievements come and go, they don’t make up who I am.

“Being a swimmer is something that people identify me with. It’s something I did out of routine but it is not who I am on the inside.”

“No way it could be coincidence”

At age 11, she was the fastest breaststroker and made the national team. Thus began a career of 17 years as a national swimmer.

But lurking beneath the surface of the bemedalled young athlete was a troubled teen.

“There was no way of escape and I felt like my life was a complete toilet bowl.”

“While it was fun being on the national team, I was exposed to a lot of things that I wouldn’t have normally be exposed to at that age,” she shared in a Celebration of Hope video. “I had to face the media constantly. I couldn’t go anywhere without being seen or being asked to do something. I just had no privacy. And it was really hard, especially as I was going through my teenage years.

“I ended up turning to partying, smoking, drinking as a way of escape and it just got worse and worse and worse each year. I did every kind of vice that you can probably think of.

“I spiralled into depression, I cut myself to try and get away from internal turmoil. There was no way of escape and I felt like my life was a complete toilet bowl.”

Her life turned around as a young adult when, to spend time with her brother, she went along with him to church.

“There’s no way it could be so coincidental … It really had to be the Lord.”

“Even though I went, I fell asleep very early on because I was completely hungover. But towards the end of the service (at the altar call) I just felt compelled to raise my hand up. I think it was when I felt the compulsion to raise my hand that I felt that hope that well, maybe, maybe, if I accept Christ, my life could turn around. I didn’t know for sure, but I think at that point my life was so bad that I was willing to try anything.

“This is where it’s so beautiful because the Lord had already provided a way out for me. I had actually been getting calls from coaches in the States offering me full scholarships to go over there to swim … it provided me a way out, a fresh start, a new beginning.

“There’s no way it could be so coincidental that everything came together at that point. It really had to be the Lord.”

Grace to heed the call

Today, at 40 years of age, the shine comes from within, from a life surrendered. Joscelin celebrating her big 4-0 in May, flanked by her family. Her children are very active and have different bents, “so I’ll let them move into whichever area they enjoy. There’s a lot of value in sports, so I would like for them to do some kind of sport. If it’s swimming, then swimming. If it’s not, it’s not. But not competitive sport, they are a bit too young for that,” she says.

For the last 12 years, Yeo has been on staff with New Creation Church. She started out in the youth ministry where, for the self-confessed introvert, was not exactly the best fit: “I had to overcome a lot of anxiety. Being in front of the crowd is something that I’m not naturally comfortable with.”

“I believed that, where the Lord had called me, there would be a supply of grace and ability.”

But as a competitive swimmer, Yeo had been trained to stay the course. The prize was of a high calling (Philippians 3:14).

“I was given the opportunity, I just took it by faith and stepped into it,” she said.

“It’s about being willing to do, and go, where God has called me to. And also believing that, where the Lord has called, there will be a supply of grace and ability.”

Yeo warmed up to the role and bonded well with the youth. At her wedding in 2010, wedding photographer Gilbert Chua commented that the wedding couple was “well loved” by the youths in the church. The youths turned up in droves for Joscelin Yeo’s wedding in 2010. Picture courtesy of 9Frames.

After six years of working with the youth, Yeo moved to her church’s counselling ministry where she now serves in a part-time role.

“I meditated on that truth until it became so evident that there was no two ways about it.”

Even though she has put her swimming days behind her, Yeo admits that competitive training has provided her with lessons of perseverance.

“But without God all that couldn’t have come into play, because after a while, you just get tired and emotions always get the better of you.

“That resilience is also about hunkering down and saying, ‘God’s Word says this so I’m going to hold on, stand firm, until I see that truth comes to pass in my life.’

“Resilience with faith, coupled together, helped me.”

Yeo paused for a moment when asked to share a time when she had to exercise both resilience and faith.

“My first pregnancy I miscarried,” she shared very quietly.

“It’s not something you expect when you’re pregnant. So that was really tough and we were grieving.” Joscelin Yeo and Joseph Purcell have been married for nine years. Purcell serves as a full-time pastor in their church.

“I don’t have answers to why it happened.

“But I just held on to God’s Word and His promise that children are my inheritance (Psalms 127:3), the fruit of my womb is my reward (Psalms 37:3). I kept holding on to the verses – an inheritance is something you don’t earn. It’s something that you’re given.

“I meditated on that truth until it became so evident that there was no two ways about it – children are my inheritance.”

Her faith and trust were not misplaced.

Sean, her eldest child, arrived in due course, and soon after, three others followed. Joscelin’s children, each bearing a special 40th birthday gift for their mum. Sarah (front left) is the youngest, while Sean (front right) will be eight at the end of the year. David (back left), is six, while Michael (back right) is four.

There is even a bigger brood that she takes care of as the Vice-President (Swimming) of the Singapore Swimming Association.

“I love the sport. It’s something that I was involved in with for many years as an athlete. It is something that I can give back to the community in terms of my experience. I want to help the sport grow and give athletes better support to achieve their dreams,” said Yeo.

“The Bible says there’s enough manna for each day, so there’s grace enough for each day.”

How does she wear so many caps and yet manage to keep her head above water?

“The Bible says there’s enough manna for each day (Exodus 16:4-12), so there’s grace enough for each day,” said the former Nominated Member of Parliament.

“If I sat down and talked about the zillion things that I need to do in the next one week, I probably would just freeze because I don’t think I’d be able to do it. But if I just take one thing at a time, and one day at a time, there’s grace enough for each day.

“If there’s something that I need to be aware of, I trust the Lord to highlight it to me. And I get that done first. 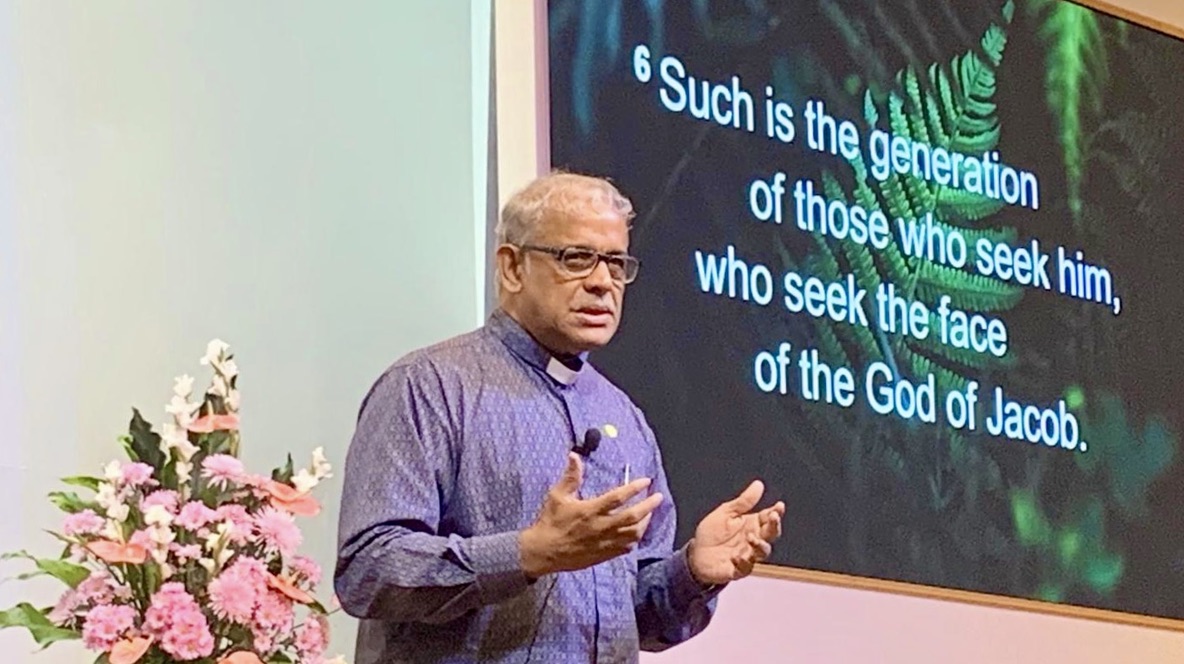 “No battle is too hard for our Lord”: Bishop Rennis Ponniah on impact of COVID-19 on the Singapore Church