“And every day, in the temple and from house to house, they did not cease teaching and preaching Jesus as the Christ.” (Acts 5:42)

Believers who gather together regularly to teach, preach, worship and fellowship together have been a feature of God’s Church since biblical times.

In present day Singapore, our own LAUD Architects is building sanctuary after sanctuary for believers to gather under God’s name.

LAUD Architects is a boutique architectural firm known for their church work.

To date, they have designed more than 20 churches in Singapore.

The firm opened in 2004 after its four founders left their previous organisation to strike out on their own. Bethel Assembly of God’s design was inspired by the account of Jacob’s dream at Bethel (Genesis 28:10-18). The building’s key feature is a flight of steps that leads people from the entrance to the worship hall up to the baptism pool. The steps incorporate benches in between for members to fellowship.

Despite their reputation, LAUD Architects never set out to focus on churches, say two of its directors, Joseph Lau and Melvin Tan. Lau, 70, is the managing director and Tan, 42, is a director.

At the time they set up their own practice, the directors had earlier completed one church, and were working on another one. Subsequently, offers to refurbish other churches just kept coming in, Tan said.

Let there be light

Some of their noteworthy Christian endeavours are the Bible House and Singapore Life Church.

With Singapore Life Church, which has a largely Mandarin-speaking congregation, the architects created a roof that looked like the Chinese character “人”. This means “person”, as the church leaders told the LAUD Architects team that community was very important to the church.

The holes on the facade also represent the different members of the parish, while the staircases in the middle of the exterior lead the public to look up and behold the cross. Renovations were done in 2012.

The design won the company its first honourable mention at the Singapore Institute of Architects’ annual architectural design awards in 2013, and it was a finalist at the World Architectural Festival the same year. LAUD Architects received its first honourable mention at the 2013 SIA Architectural Design Awards for its design of Singapore Life Church. It was also a religion category finalist at the World Architecture Festival, along with their concepts of Bethel Assembly of God and the Bible House.

The Bible House was another interesting assignment, says Lau. It was housed in a tear drop-shaped spot, making it a “very difficult” site to deal with as there were only two fronts, he says.

Grace Assembly of God was inspired by Lau’s hike through the sunlit gorges in Jordan.

The team was racking its brains to come up with ideas when an intern spoke up: “The Bible has two testaments, right?”

What ended up on the drawing board was a building with two distinct facades: One made up entirely of transparent glass, representing the New Testament where believers have free access to Jesus. The other exterior, symbolising the Old Testament, is completely opaque except for tear-shaped holes, to highlight the rigidity of being governed by law. A blood-red wall separates the two – an emblem of Christ’s death.

Other spiritual spaces LAUD Architects has left its mark on include Bethel Assembly of God, where the designers incorporated a grand staircase that brings to mind Jacob’s ladder, and Grace Assembly of God at Tanglin Road, whose atrium design was inspired by Lau’s trip to Jordan. The Bible House was designed to reflect both the Old Testament (left), with opaque walls and tear-shaped windows representing the rigidity of being governed by law, and the New Testament (right), with transparent glass to depict believers’ free access to Jesus. A blood-red wall separates the two, signifying Christ’s death.

While hiking through the narrow Jordan gorges, he saw the sun’s rays shining down from above.

“It was so overwhelming,” he says. “It reminded me of what it might have been like when God said, ‘Let there be light’ and the light came through.” (Genesis 1:3) The atrium of Grace Assembly of God was inspired by the narrow, sunlit gorges in Jordan.

Since the completion of Singapore Life Church, LAUD Architects has gone on to garner multiple accolades and score bigger commercial developments such as the Philips APAC Centre and Eight Courtyards, a condominium at Yishun.

However, Lau says they still make it a point to do any church project that comes their way, except for minor renovations such as the installation of a new partition or small extension.

Setting an example is “not just about being Christian. We are accountable to the state too. It’s about integrity”.

Church contracts are less profitable than commercial ones and take a longer time to wind up, says Tan. Budgets are tight, meetings are usually held after office hours or during the weekends, and the design team has to manage an entire committee with no architectural expertise, rather than a single, experienced property developer.

Yet, the directors are unfazed by the company’s association with churches.

Lau believes because of their service to churches, God has blessed his office with deals they never thought they would clinch, the Philips headquarters and condominiums included.

When it comes to secular settings, the team stops short of incorporating biblical elements into their blueprint. But they hope they are at least glorifying God in other ways.

Ensuring the purpose of architecture is always met is one of them. “Our statement is ‘LAUD Architects: Making joyful spaces’,” Tan says. “Architecture is not just to look good, but for people to enjoy.” The contract for Philips’ new Asia-Pacific headquarters was a gift “from above”, says Joseph Lau, LAUD Architect’s managing director.

The bosses have the added responsibility of living out their testimony among both customers and subordinates. The building and construction sector is notorious for cutting corners, says Tan.

“Clients will ask you, ‘How do I get out of this requirement so that I can get more space, or get a bigger plot’,” he says. That is when they have to stand firm. “It’s not just about being Christian. We are accountable to the state too. It’s about integrity.”

Tan does not believe that staff should be working past midnight every day as well, which can be the industry norm.

LAUD Architects hires more employees per project than other firms, Tan believes. People are expensive, and businesses try to employ as few workers as possible to maximise profits.

To “laud” is to praise something. Lau and his partners chose the name so they are always attributing their success back to God, especially in an occupation where it is easy to become arrogant, says Tan sheepishly.

The directors named the company Laud Architects so that they “laud”, or glorify, God in everything they do.

The nature of the craft opens one up to a lot of acclaim – design awards, one’s artistry permanently on display – and contractors defer to the architect’s demands.

“It’s interesting that the Bible uses the word ‘Creator’ (Romans 1:25) to describe God,” he says. “We tend to think we are the ones that create the space, but our creativity comes from the original designer.”

He personally holds to Proverbs 3:5-6, and recalls an occasion when God’s wisdom prevailed.

It was at the start of conceptualising Singapore Life Church’s new building. After Tan presented his original design to the the church panel, a woman thanked him but remarked: “It looks like a high-class community club.”

He and his team were given two weeks to come up with a new layout.

Two days before the next meeting, they still had nothing to show.

Tan prayed, and he managed to sketch the rooftop and “something about a zip coming in together with a cross”. The team scrambled overnight to put the model together. The foyer outside one of Singapore Life Church’s worship halls, where members can gaze at the cross from inside.

On the morning of the presentation, Tan proudly showed his wife the proposal, but she seemed unimpressed.

But the church was. Tan called his wife right afterwards to tell her they loved it.

“And she said, “Yeah, I know. I think it’s fantastic. But I didn’t want you to go into the presentation thinking it was your design.'”

Tan is always moved to tears when he brings up this incident.

He says it always reminds him that “God gives and God inspires”. And, now that the design has gone on to win multiple awards, he adds: “God provides too.”

When God phoned: Pacific Healthcare's GM on the calls that changed his life 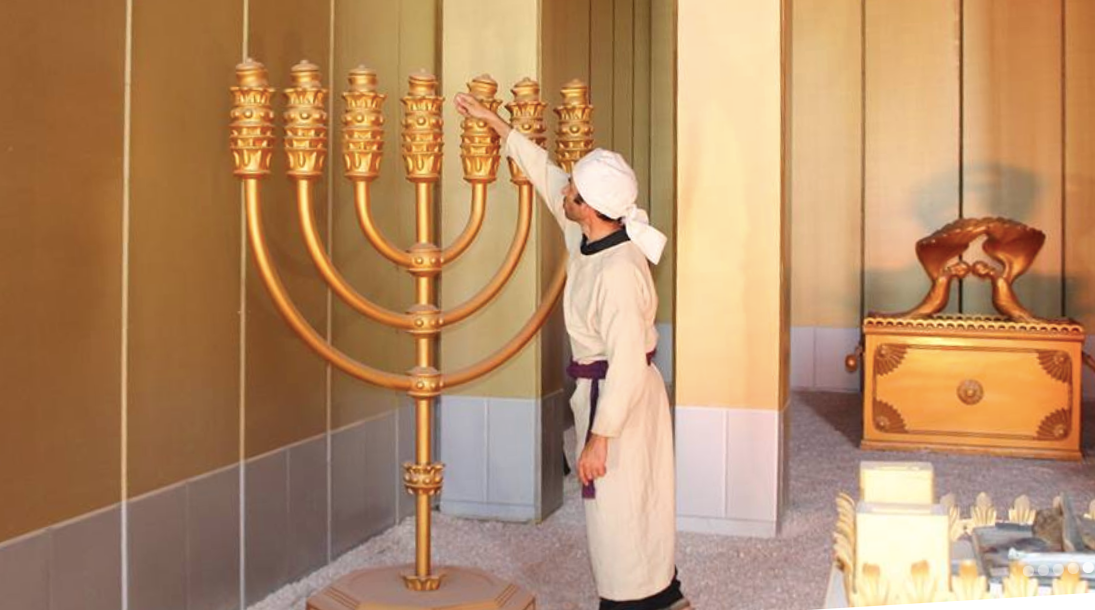 The Jewish menorah: Not just a “lampstand”